Whitney and I made it home from New York right at 6:00 last night, greeted the girls and gave them their shirts from the Empire State Building and the Times Square Hard Rock Cafe, and then immediately loaded everybody up for dinner at Ruby Tequila’s. The food in NYC was great and everything. Whitney and I enjoyed real New York style pizza at a street market in Battery Park, we ate stromboli between the World Trade Center and St. Paul’s Chapel in the financial district, and we savored flavorful Philly cheesesteak sandwiches and wonderful New York style hot dogs at Yankee Stadium. But we needed some Tex-Mex right away last night. And Ruby T’s delivered, as always, with those amazing Sunset Enchiladas. 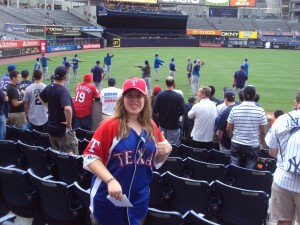 It was a fabulous week in New York with the Whitster. We were disappointed upon arrival Monday evening to learn that the inside of the Statue of Liberty was closed until next year for renovation and the ESPN Zone in Times Square shut down in 2010. We were also disgusted at the way the Rangers played in Yankee Stadium. Until Thursday’s finale of the four game series, Texas had lost eight in a row in the four-year-old ballpark and eleven out of twelve. Tuesday night, the Rangers didn’t get a base hit until the seventh inning. If it weren’t for Josh Hamilton, they would have been totally blanked on Wednesday. Yuk. We went into Thursday’s afternoon affair having witnessed a total of just six Rangers hits, two horrible Rangers losses, an Ian Kinsler ejection, and Nick Swisher standing a little too long at the plate after his homerun. Oh, yeah, I also had to literally pull Whitney out of a confrontation after Wednesday’s game with four or five college-aged Yankees fans who were openly doubting Josh Hamilton’s sobriety and loudly questioning Nolan Ryan’s manhood. It wasn’t pretty.

So, while we had done lots of really cool things in NYC, the most important thing we flew there to witness and experience hadn’t happened. We saw Josh hit two amazingly breath-taking homers Wednesday. But Texas had lost both games.

a great game was set early when Whitney actually met Matt Harrison during the pre-game stretching, got his autograph, and took a pretty sweet picture with the Rangers’ star hurler. Texas wound up scoring ten runs in an exciting back and forth contest, we got to meet Mike Olt’s family from Connecticut, Derek Holland was decent, and we got out of there with a big win. We even ran into Russell Mihills and Cody and Jamie at the stadium in the middle of their father and sons trip to New York. (We made Jamie take the group pictures because he had purchased and was actually wearing a Yankees cap!) 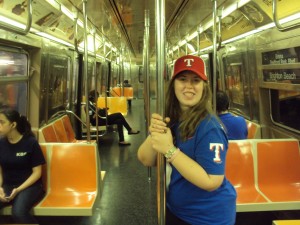 Whitney and I learned to negotiate all the buses and trains, which gave us a tremendous sense of accomplishment every time we arrived at a destination. We met some really nice people from Texas and from New York. We learned a little more about the Yankees franchise history and culture. We reflected together about the evil and futility of violence and war. We talked about immigration and the role it played in shaping the United States and the love our God has for the alien. We expressed great shock everytime we found a place that sold Diet Dr Pepper. And we wore Rangers shirts and Rangers caps, from early in the morning until late at night, for five straight days.

Together. We did it together. What a blessing. I thank God for the wonderful week with my oldest daughter.