Romo to the Rescue 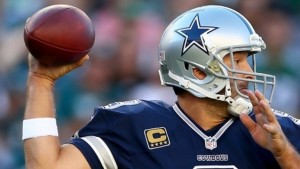 Tony Romo has not thrown a pass in an NFL game nor has he seen a pass rush at NFL speed in two months. He is not riding to the rescue of the Dallas Cowboys. Not Sunday in Miami. Not in 2015. Not ever.

The same problems that marked this team before Romo broke his collarbone in week two are still there. When this team was at full strength before the opener against New York I picked them to go 8-8. Things have only gotten worse since then. Much worse.

Who’s the running back on this team? Well, against the Dolphins it’ll be Darren McFadden. Remember him? Seventeen carries for a total of 32 yards last week against Tampa. And he’s nursing a strained groin. Behind him? Three guys you’ve never heard of: Trey Williams, Rod Smith, and Robert Turbin. The next carry either of those guys gets Sunday will be his first ever for Dallas. Yeah, Miami’s run defense is terrible, next to last in the league. By this time tomorrow, they will have cracked the top twenty.

Who’s going to catch the ball? One reason I thought the Cowboys would fall back to .500 this year is because of Dez Bryant. Regardless of Jerry Wayne’s opinion, Dez has character issues. So when he signed the $70-million dollar deal this summer, I figured he was done. Mission accomplished. And I was right. In the first minute in the second quarter in the first ballgame, Dez had to spend time in the locker room receiving IV fluids to treat dehydration. Dehydration? In the second quarter? In the first game? At home? What was he doing all week? Not getting ready to play football. Since then, Dez has broken his foot and he’s currently hobbled with additional injuries to his knee and ankle. Miami seems to have problems covering tight ends, so Jason Witten may have a big game. But with no one to stretch the Dolphins D, and no one to run the ball, and Romo protecting a tender collarbone, Suh and company can pin their ears back. Everybody said last Monday that Matt Cassell had thrown his last pass of the season. Not so fast…

All of these areas were problems before the season started and now they’ve only gotten worse. That doesn’t take into account all the new problems that come with a seven game losing streak. Sideline eruptions and locker room blowups. Finger pointing. Accusations against the owner and the head coach. Charges of favoritism. Evidence of selfish plays and dogging-it give-ups.

For the Cowboys fans who still think a playoff spot is a possibility — there seem to be way too many of them — tomorrow’s game in Miami will hopefully be the final blow back to planet Earth reality. To even hope a 2-7 team can contend for a postseason slot is ludicrous; to say it out loud with such confidence as some are borders on clinical insanity.