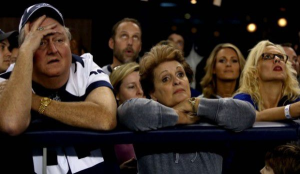 There are two teams in the NFL that each lost its star running back from a season before and were forced to play four different quarterbacks this year: the Dallas Cowboys, who finished 4-12 in last place in their division, and the Houston Texans, who finished 9-7 in first place in their division. Both teams faced eerily similar circumstances — I’ll equate the loss of Sean Lee with the loss of Jadeveon Clowney, even though Clowney’s more of an impact player and the Cowboys should know by now they can’t count on Lee for more than half a dozen games — but Dallas wound up with the second worst record in the league while Houston is heading to the playoffs. I haven’t seen anybody make the comparisons between the two teams. I haven’t read anybody who is recognizing the similar situations both Texas teams faced and drawing out the striking contrasts in how both teams played. I’m interested if somebody wants to break that down.

For now, let’s just all agree that the Cowboys have reached rock bottom. By “rock bottom,” I mean in the worst possible situation; blow it up and start all over again from scratch.

Consider that in the 56-year history of the franchise, only three teams have finished with worse records. And all three of those teams were rock bottom.

In 1960, the Cowboys’ first year in the league, they were an expansion team playing without the benefit of the college draft. The team was stocked with players the other teams didn’t want. Their starting quarterback was a 5’7″ journeyman they had to coax out of retirement. New coaches. No players. They were truly starting from ground zero, nothing. And they went 0-11-1.

In 1988, Tom Landry’s last year, the Cowboys were struggling with aging former superstars and busted draft choices. Their past four number one draft picks were Billy Cannon, Kevin Brooks, Mike Sherrard, and Danny Noonan. They played Steve Pelluer, Gary Hogeboom, and Danny White at quarterback. Too Tall Jones, Michael Downs, and Everson Walls were still on this team. They entered 1988 on a string of two straight seasons with losing records. In 1984, Dallas failed to qualify for the playoffs for the first time in ten straight years. In 1986, the Cowboys string of twenty consecutive winning seasons was snapped. Yes, they won a weak NFC East in 1985, but the cracks were showing in several blowout losses that year, including crushing defeats by Cincinnati and Chicago. It was going downhill and they couldn’t stop it. And they went 3-13. Rock bottom. Sell the team. Fire all the coaches. Get rid of all the players. Start over from scratch.

That’s precisely what happened. I’ll stomp up and down all day long and rail against the way Jerry Jones handled his purchase of the team and his subsequent firing of Landry. But there’s nobody alive, starting with me, who doesn’t think it had to be done. So, in 1989 the Cowboys were truly starting over for the first time since their expansion year of 1960. All new coaches, all new players. The thing had been blown up and they were laying a brand new foundation from scratch. That team went 1-15.

In fact, let me state again as I have so often in this space, Dallas is right now more rock bottom than it’s ever been in its history. They haven’t been to a Super Bowl in twenty years; the previous long Super Bowl drought was thirteen years. The Cowboys haven’t been to an NFC Championship game in twenty years; the previous long conference title game drought was eight seasons. And they’re no closer now than they were ten years ago. Since 1997 this team has 152 wins and 152 losses, the exact definition of mediocrity. Jason Garrett is 40-40 as the head coach. Yuk.

This year saw the Cowboys defense force only eleven total turnovers, the lowest number in the history of the NFL. Ever! Dallas finished with the second worst offense in the league this season, scoring only 17 points per game. They were tied or had the lead in the fourth quarter eleven times this season, but wound up with only four wins. That’s a lack of coaching. It’s a lack of character. It’s a lack of talent. Or will. There’s a whole lot of lack with this team. 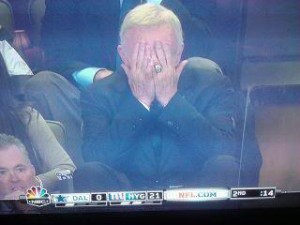 It’s time — way past time — to clean house. To blow it up. To start all over from scratch. New coaches, new players, new general manager, new ownership, new everything. Yeah, right. It appears the entire coaching staff is safe and, of course, there will be no changes in the Jones family front office. The Cowboys are under the illusion that injuries are solely to blame for the fourth worst record in the history of the team. They’re delusional. The signs are all there, and have been for many years, but they’re being ignored by the only people who can turn it around. For cryin’ out loud, they all thought they were going to the Super Bowl this year! It’s laughable!

Last year’s 12-4 record and playoff win reminds me of 1985: a division title in the middle of a whole lot of mediocrity and losing that bought those in charge a little more time, but proved to be a singular fluke in an inevitable downhill slide that can’t be reversed until everything gets blown up. The Cowboys are in much worse shape now than they were when Jerry Wayne bought the team in 1989 and fired everybody and started over from scratch. Much worse. 4-12. Not competitive. Rock bottom.