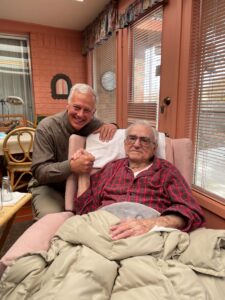 You can’t be the preacher at Golf Course Road and not know Willie Goudeau. Willie is THAT guy here at GCR and, frankly, in Midland. He’ll be 100 years old next month. He’s been at Golf Course Road for almost that long. He’s a shepherd. A Bible class teacher. A small groups leader. His name comes up around here at least once a week. He’s the legend.

My first week in Midland I was introduced to Willie via a video that’s come to be called the Lawnmower Man video. It’s the true story of how Willie won over his gruff, hard-hearted neighbor by mowing his lawn every week while he was recovering from surgery and a broken leg. The video reveals Willie’s kind heart and his sacrificial nature, his desire to consider the needs of others more important than his own, his generosity and love. I watched it twice. It moved me to tears both times. I was told about Willie’s son, Eugene, who was killed by a drunk driver and how Willie publicly forgave the driver and appealed to the judge in the criminal case for leniency and grace. He studied the Bible with his son’s killer and prayed for him fervently. Dozens of times I’ve been told about Willie’s signature line, “Richly blest.” That’s what he says about himself. That’s how he answers any inquiry regarding his well being. The line inspired a song written by Ken Young. Most people around here use the phrase quite often. Not everybody knows it comes from Willie.

I was honored last week to spend a little over half an hour with Willie at his home on Bristol Court where he has lived since 1973. I was privileged to be joined by Tod Brown, Kyle McGraw, and Gary and Gaye Glasscock, all of whom have known Willie for decades and have their own wonderful Willie Goudeau stories. Tod tells me Willie has been his biggest cheerleader his whole life. Kyle interviewed Willie a few years ago for Ken Young’s two hour documentary appropriately titled “Richly Blest.” Gary and Willie taught a Bible class together. Everybody’s deeply connected to Willie Goudeau.

From the moment I walked in the door and shook his hand, he knew exactly who I was and seemed genuinely delighted to meet me. He told me he watches me preach online every single Sunday. He quoted my own words to me from a couple of recent sermons. And he very graciously said many kind things about me that just aren’t very true.

We talked together about GCR and the good people at this great church. He reminisced a bit about the Browns and the McGraws and the Glasscocks and their families. He offered me some advice about loving people and serving others. He told me he was ready to meet the Lord in person and then to get things ready for us. I told him I could officially be the preacher at GCR now that I have met him and have received his blessing. He said I was blessing him, he wasn’t blessing me. He said I didn’t need his blessing. He said he knew that I was listening to God and following Christ when we came to Midland to worship and serve with Golf Course Road.

Willie is a saint. He has an incredibly warm and sweet spirit that reflects the glory of our God. He is gracious and kind. His impulse is to encourage and he does it easily and naturally. And it’s obvious that he has a tight relationship with the Lord. He and God are close. They are friends. They know each other intimately. Being in Willie’s living room is like being in the presence of Jesus. Not because Willie is Jesus – he’s not. But because it’s so clear that Jesus lives in Willie.

I thank God for Willie Goudeau and the Christian impact he has had and continues to have on this congregation of God’s people. I feel official now. Of course, I’ve met Willie Goudeau! And. Wait for it. Here comes the line. I am richly blest.