Over Before it Started 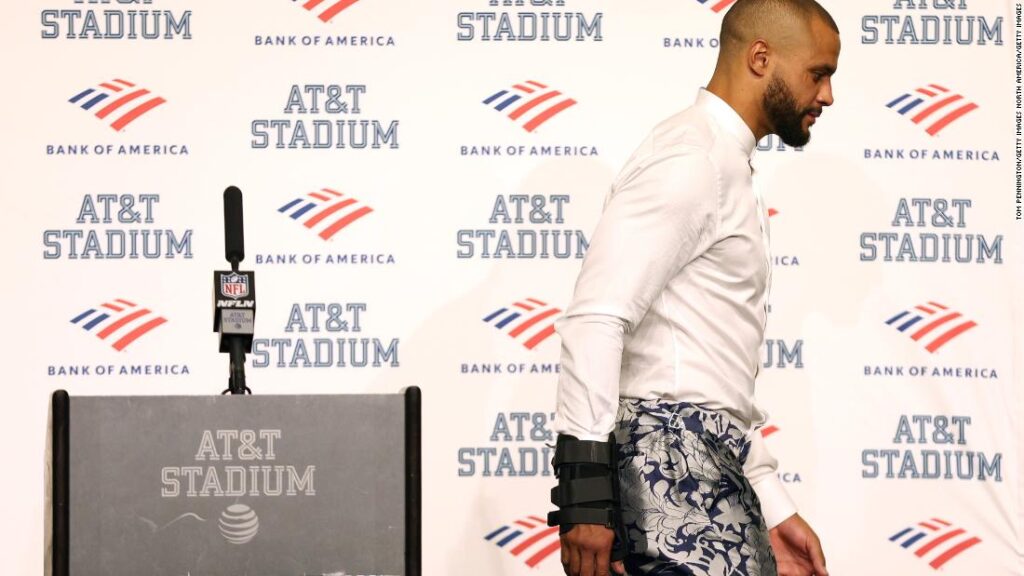 Now what are we going to do?

The wonderfully delightful thing about watching the Cowboys is experiencing the week-by-week drama of the buildup to the inevitable disaster. There’s nothing quite like watching Dallas stack up a two or three game NFC East lead by Thanksgiving and then systematically implode in unimaginably creative ways, climaxing in a do-or-die division showdown in late December that they lose when something happens you’ve never seen before in your life. You can’t beat it.

It was bad before the $40-million quarterback broke his throwing hand thumb. Dak Prescott was having one of the worst games of his career Sunday night against the Bucs. He only completed one pass of more than 20-yards and left the game midway through the 4th quarter with a 47.2 quarterback rating. In his defense, he’s throwing to an overrated CeeDee Lamb and a bunch of practice team receivers. But he looked rough.

The offensive line was heading into the season depleted by free agency and injuries, so they could ill afford to lose left tackle Connor McGovern on the opening drive. But they did. Which means the running game was even worse than we thought it would be. Ezekiel Elliott’s longest gain was seven yards.

Which means the whole offense would sputter. And it did. The Cowboys finished with only 244 yards of total offense, twelve first downs, and no touchdowns. Zero. Nothing but that opening drive field goal. It was the Cowboys’ worst offensive showing on opening day since the Saints blasted Jimmy Johnson and Troy Aikman in their NFL debuts in 1989. Dallas finished 1-15 that season.

Dallas was the most penalized team in the NFL last year at 7.5 penalties per game. They picked up ten Sunday night. Terrence Steele was the worst offender with three false starts and a hold. And an offense this bad can’t overcome penalties.

The defense was always going to be the strength of this team, but Leonard Fournette looked like he was running against orange cones. He finished with 127-yards rushing with eight runs of nine yards or more. It was easy.

So. It’s already over, right?

The Cowboys are all alone in last place in the NFL’s worst division and they have the lowest scoring offense in the league. They’ve lost their starting quarterback until at least the 10th or 11th game. Cowboys fans booed and threw  trash at Prescott as he was leaving the field with his broken thumb. He had a pin and a metal plate surgically inserted into his hand yesterday. Who knows if he’ll be ready even in eight weeks? And does it really matter? It’ll already be over by then.

Without Dak, the Cowboys will face both Super Bowl teams from last year and all three teams in their own division. Saquon Barkley is the league’s leading rusher for the Giants. Jalen Hurts to A.J. Brown helped the Eagles rack up 38 points in their opener. Even the team in D.C. won Sunday and has a one-game lead on Dallas.

The Cowboys have more salary cap space than any team in the NFL and they decided not to use it. Jerry Wayne decided this team didn’t need Amari Cooper or Cedric Wilson or Randy Gregory or La’el Collins. Jerry made this bed and now he’s in it. It almost makes a person feel sorry for Mike McCarthy.

Now what do we do? The franchise record for most losses in a season is 15. Is this what we’re watching now? If the Cowboys lose 15 or 16 games this year, would that be enough to put any kind of dent in Jerry’s wallet, forcing the owner/GM to reconsider his role in this 27-year dumpster fire? Is this really finally that year?