Nothing Sanctimonious About That

Back in March, what if you could have put money in Vegas on the Texas Rangers having more postseason wins than the Dallas Cowboys’ number of regular season wins? How would you be spending those millions of dollars today for the Kingdom? 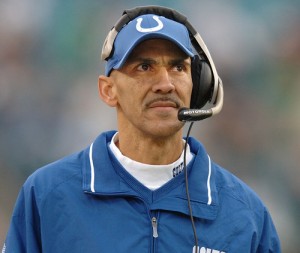 Former Indianapolis Colts coach Tony Dungy is being vilified by many in the mainstream media as a sanctimonious finger-wagger. As a football analyst now for NBC, Dungy is being paid to weigh in on the issues of the game. But apparently not everybody likes what he has to say.

Reggie Bush was right to return the Heisman Trophy. Rex Ryan should cut back on his foul language. Braylon Edwards should have been benched for a full game for his DUI arrest.

Dungy is being bashed by critics who say he’s trying to force his own standards on others. According to a recent Sports Illustrated article written by Phil Taylor (Oct. 18, 2010), a Google search of Dungy’s name combined with the term “holier than thou” turned up 871 hits. A popular sports website shredded him last week with an article headlined “TONY DUNGY IS AN INSUFFERABLE #*@!+*!!”

Dungy says, “I’m not trying to be anyone’s judge or conscience. I’ve always been passionate about doing what’s right, about living as a Christian, and I’ve never hidden that.”

In my view, Dungy does it right. He’s not loud. He’s not obnoxious. He’s not an attention-seeker. He’s not mean. He doesn’t take pleasure in stirring up controversy. He criticizes and comments without mockery or sarcasm. And I’m not sure how this makes him insufferable. Or a jerk.

Unless it’s that he’s so different from the world. Unless his voice is just that unique. Unless his life stands in such contrast to the lives of those who hear him.

Taylor concludes his excellent article with this question and conclusion:

Could it be that Dungy’s virtue makes some of us uneasy? Maybe we’re so unaccustomed to a good man simply trying to apply his own set of values to the world around him that his critics have been reading him wrong. You needn’t believe he is always right to appreciate his efforts to always do right. There’s nothing sanctimonious about that.

Trying to always do right, no matter the consequences, regardless of whether it sits well with the culture around us. Now that’s something we can embrace. Actually, that’s exactly the thing to which our Christ calls us all.