Not the First Century Church 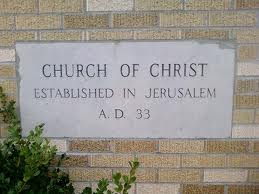 In Leroy Garrett’s “What Must the Church of Christ Do to Be Saved?”  the author makes twenty suggestions for our faith heritage if we are to remain a viable voice for the Kingdom in our increasingly post-modern, post-denominational, post-Christian world. The numbers don’t lie. We’re losing our people left and right. And some things need to change. As Churches of Christ, some things we have refused to change over the years are now coming to roost. It can no longer be ignored.

Garrett’s eleventh suggestion is that we shed ourselves of the tremendous and unnecessary burden of trying to become an exact replica of the Church of the New Testament. Not only does Garrett say it could never be accomplished; it should never be tried.

Recognize that we can’t be a first century church.

Garrett writes that a lot of our people have for decades understood the Churches of Christ to be a complete restoration of the New Testament Church in name, in belief and practice, in leadership structure and worship. Frankly, while being raised in and by the Church of Christ I, too, was taught this very idea.

It is a fiction grounded on false assumptions, such as the church of the apostles having a particular name, which it did not, and that it had a uniform organization and clearly-defined “acts” of worship, which it did not.

There is no ground for supposing that God ever intended for his Church in each succeeding century over the past 2,000 years to be a first century church, even if it were possible, which it isn’t. The evidence rather suggests that God calls us to do for our generation what the primitive church did for its generation. Nothing in Scripture indicates that the earliest congregations were intended to be models for all time to come or even in their own time for that matter. The facts of history, culture, and civilization demand that the Church of Christ of the second century would be a second century church and that the church of the sixteenth century would be a sixteenth century church. Each generation of Christians is to serve its own time, drawing upon both Holy Scripture and the experience of the Church (tradition) for its direction.

A lot of this, of course, is predicated upon the ways we view and interpret the Bible. Those who see the Scriptures as a rule book and a list of guidelines and commands to follow in order to be “right” with God will seek those patterns and regulations and strive to be “right.” Those who understand the Scriptures to be the Spirit-inspired accounts of real people being impacted by a real God and the very real ways it’s all worked out in real life will look for something else. In considering church beliefs and practices, structure and worship, those brothers and sisters look for whether those things are in tune with God’s Spirit, whether they genuinely reflect the Gospel, and whether they bring glory to God.

Instead of searching the Bible and asking the question, “Is this what the first church did?” we should be asking, “Is this consistent with the person of Jesus?” The “pattern” for the Church — and this “pattern” will never change — is the person of Christ Jesus, our risen Lord. It’s his image we see in the mirror. It’s his likeness into which we are being transformed by God’s Holy Spirit. It’s his death, burial, and resurrection that should be modeled and proclaimed and upheld in every one of our beliefs and practices. The Good News should be the lens through which we view our church beliefs and practices. Jesus’ sacrificial service should be the spirit with which we enter every elders meeting and committee hearing. Our faith is in a person, not a policy; the Church is built on a relationship, not regulations.

No one congregation in the New Testament therefore can be viewed as our pattern, nor all of them together, but out of their experiences, their strengths and weaknesses, we learn how to be his Church.