(The opening paragraph with all the meteorological details is for my dad because… well, because he’d be extremely disappointed if I didn’t. Of course, mom, you’ll have to print this off and hand it to him.)

It’s official! The National Weather service measured an even nineteen inches of snow at the airport today, falling just three-tenths of an inch shy of the all-time record for snow in Amarillo during a 24-hour period which was set way back in 1934. While achieving close-but-no-cigar status on that all-time mark, today’s snow dump did set a couple of other records worth noting. It breaks the all-time February 25th record of ten inches and the all-time record for any day in February, twelve inches set back in 1893. If you want some real perspective on the grand scale of all this, consider that the Donut Stop was closed today. First time in nearly forty years. So, yeah, this doesn’t happen all the time up here. Not even close. What we’re enjoying here is downright rare and even historic. 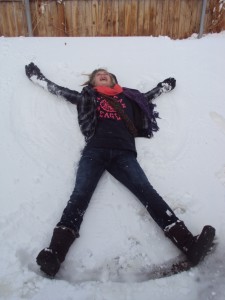 The snow stopped at about 2:00 this afternoon and the winds died down from the 50-55 mph range (a top gust of 75 mph was observed at the airport! That’s for you, too, dad.) to about 15-20 mph and the clouds actually cleared out enough for the sun to shine through for a couple of hours. Carley and I did venture back out in the mess to do a little more exploring and tackle a couple of building projects while the other three girls in the house drank hot chocolate and watched “Lord of the Rings.” (Help me.)

Carley and I buried each other in the snow, made snow angels with disproportionately small heads in the four-foot drifts in the alley, shoveled the front walk and half of the back drive, surveyed wind damage at a couple of spots in our fence, visited with neighbor Joe and his precious little girl as they cleared their driveway, and talked for a while with neighbor Warner and his little dog, Charlie, as they braved the elements for a much needed walk. As for the building projects, we attempted to dig a long tunnel under the massive drifts in front of the house (failed), build a snowman (failed), build a snow flamingo with a super long neck (failed), and construct a very sophisticated igloo / fort (jury’s still out on the fort; it got dark before we finished). Valerie did venture out once this afternoon to collect enough snow to make some delicious snow ice cream. It was treacherous for her as Carley and I bombed her with snowballs as she scrambled back to the door. The ice cream is excellent! 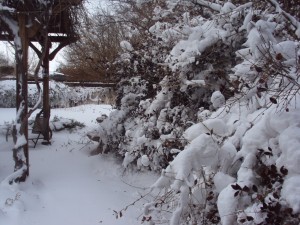 I’ve spent a good deal of the in-between time today reading a new book, Lombardi and Landry. It’s written by Ernie Palladino, a long time beat writer for the New York Giants back in the 50s with the Journal News. The whole book tracks the beginnings of the Hall of Fame careers of Tom Landry and Vince Lombardi, when they both worked together on the Giants’ staff of head coach Jim Lee Howell. Can you imagine that? Lombardi running the offense and Landry in charge of the defense. It was said at the time that Howell was just in charge of blowing up the footballs during those championship years. It’s a fairly decent read so far, all of it written from the Giants’ perspective and, in my view, a little Lombardi heavy. I was surprised to read Palladino giving Landry credit for suggesting the Giants move Kyle Rote from halfback to flanker and changing Sam Huff from an offensive lineman to the first true middle linebacker in football history. Of course, the rest is history with those two legendary players. But I’ve never heard Landry credited with those obviously important decisions. I read Huff’s autobiography a couple of years ago, and I don’t remember reading anything about that. Anyway, it’s an OK book. I’m almost halfway through it. I’m up to the 1956 championship season, Frank Gifford’s breakout year. 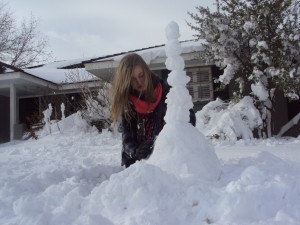 School has already been cancelled for tomorrow. Again. It’s supposed to get down to nine-degrees tonight with wind chills below zero. So, no alarm clocks! Maybe we’ll finish the fort tomorrow. Maybe it’ll be OK after lunch to try to get out on the road, see a movie or something. Maybe I’ll just throw another few logs on the fireplace and keep reading.