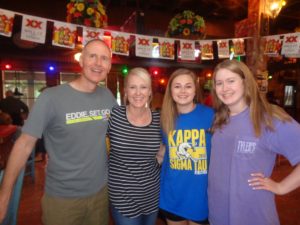 A quick hit from Arlington as we wrap up the final leg of our family vacation. We had a marvelous lunch today with Valerie and the sweet family who is housing her while she serves as a summer intern for the student ministry at Pleasant Ridge Church of Christ.

Our old friends, Mike and Traci Thatcher and their daughter Bella, actually signed up to keep Valerie this summer before anybody made the connection that she belonged to us. We ran around with the Thatchers for a while during our brief stay in Arlington while I was working at KRLD during the early 2000s. We were actually the first babysitter Bella ever had! Now she and Valerie are sharing living space and really forming a wonderful friendship. Carrie-Anne and I are so grateful and feel so very confident that when Val’s car won’t start or the youth minister announces to the church that he’s taken another job in Abilene, Mike and Traci are there to take care of our little middle. (I have no idea why Valerie insists on wearing that Kappa shirt in the photo up there; she was wearing it before she met Mike, so I can’t blame him.)

While we’ve been away, John Mark Beilue, the highly respected columnist for the Amarillo Globe News, wrote a really nice story about Jake and Stevie Reeves’ hospital room wedding. You can click here to read his column. By the way, Jake is home now recovering from his surgery, learning how to manage his newly-diagnosed diabetes, and trying to tolerate diet root beer.

My once-every-five-weeks faith column for the Amarillo paper was also published last Saturday. It’s about ear-hair and God’s promises in Isaiah. You have to read it to understand.

And I’d love to recommend to you two books I’ve read during this ten-day vacation. They’re both excellent.

First, the largely untold and completely forgotten story about the world’s first-ever serial killer, in Austin, Texas during the mid-1880s. The book is titled The Midnight Assassin, written by Skip Hollandsworth, the famed editor of Texas Monthly magazine and the writer of the screenplay for the excellent movie “Bernie.” Skip did his research for almost two decades — and it shows. The book is a fascinating study of the events surrounding a dozen killings in the capitol city of mostly African-American servant girls. The murders were all extremely gruesome — one every couple of months — carried out in the middle of the night in the exact same way, and caused a panic throughout Austin that spread to all parts of the state from Gainesville to Galveston. The murderer was never caught. The mystery was never solved. And less than two years later, prostitutes were being killed in the middle of the night in London. Yes, Jack the Ripper! And, yes, most people at the time believed that Jack the Ripper and the Austin Assassin were the same guy! At the very least, most agreed that Jack the Ripper had been inspired by the Austin killer.

Hollandsworth produces hundreds of quotes and clippings from 130-year-old newspapers, police records, court documents, and journals that link the two. He also examines the question “Why do we know so much about Jack the Ripper but almost nothing about the Austin killer?” from every angle. And he pays very careful attention to the historic detail of every scene. These Austin murders were taking place during the construction of the capitol building, during the time when electric lights and telephones were transitioning from experimental to commonplace, during the construction of the very first dam on the Colorado River, and during the world expo in New Orleans when business leaders first began billing the wonders of our state with the slogan “Everything’s bigger in Texas.” The politics of all this was directly impacted by these murders that hung over the city and the state and had to be carefully managed. It’s so interesting. And, if you’re familiar at all with Austin, maybe you’ve wondered about those 130-year-old light towers that are scattered all over the city. Yep, they were erected in reaction to the midnight murders. If you’re a Texas history buff or a murder mystery fan, you absolutely cannot go wrong with this one.

And, Love Does by Bob Goff. I’d like to describe to you what it was like listening to Bob Goff’s 40-minute keynote address at the Pepperdine Lectures this past May. But it would be impossible. All I can accurately communicate in this space is that Goff loves God and he loves people. Passionately. Frantically. Maniacally. Hilariously. If you read his book, you’ll agree. If you read his book out loud, at double-speed, laughing at yourself after every fourth sentence, then you’ll have a better idea about his keynote.