Just Give It To Lynch!

If you were on the one yard line and needed that one yard to score the touchdown that would win the Super Bowl and make you champions of the NFL; if you had fifty seconds on the clock and a timeout in your pocket and three tries to get it in; and if you could choose any running back in the whole league to attempt to run it in for you; what would you do?

You would choose Seattle’s Marshawn Lynch and you would hand the ball off to him three straight times and win the Super Bowl. You would do that. I would do that. All of us would do that. We wouldn’t even blink. Seattle coach Pete Carroll could have made that call in between smacks of gum.

But he didn’t. Because he inexplicably called the pass that was intercepted and snatched defeat from the jaws of victory, Brady and Belichick and the Patriots are being heralded as one of the greatest franchises in NFL history. And it’s sickening to me. If Carroll chooses to win the game instead of giving it away, the Patriots today are in a conversation that includes the Bills and the Giants, not the Steelers and 49ers and Cowboys. If Lynch runs it in and wins the game, Brady is not being compared today to the likes of Bradshaw and Montana. He threw two really bad picks yesterday, for crying out loud. If Seattle does what all 70,000 people in the stadium and all 114-million TV viewers knew they should have done, Belichick today would not be classified with the likes of Bill Walsh and Chuck Noll. Man, one play like that — and it’s not fair — can change the whole national conversation and perception of entire franchises forever.

Wild finish for sure. If you were watching, you’ll never forget where you were and who you were with when Wilson threw that goal line pick. 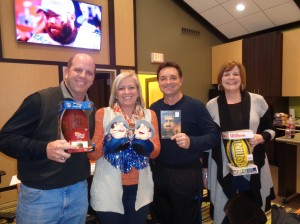 Last night’s Jericho / Jars of Clay Super Bowl Party at John Todd’s place saw another dynasty in the making take a tremendous fall from grace. Two-time defending champion of our proposition bets contest, Scott Bentley, went down hard to new champion James Vaughan. James squeaked out a dramatic one-point win over Kristi Landon when Tom Brady, in his MVP acceptance speech, mentioned his teammates before he mentioned the Patriots fans. Since Scott won the first two Super Bowl prop contests, the trophy will forever be called the Bentley Trophy in the same way they named the Super Bowl trophy after the guy who won the first two. But today it resides in the office of James Vaughan. For the record, Roger Kysar came in third and Wendy Miller finished dead last. And the upstairs meeting space at Premier Vision is an excellent place to watch a football game.

When your daughter’s a Senior, almost everything that happens has that “this-is-the-last-time-this-will-ever-happen” feel to it. So it was with the annual Sandie Revue this past weekend. The annual variety show is the largest and most extravagant of the Amarillo High School choirs’ programs. And Valerie not only wound up in the loudest yellow dress at the very front and center of the major numbers, but she and three of her choir mates teamed up to perform a wonderfully moving rendition of “Something in the Water.” The song is about the transformation that occurs at baptism. They ended it with a beautifully blended a cappella verse from “Amazing Grace” that captivated the audience until the very last note. I don’t think it was just the dad holding the cam-corder who had tears in his eyes. 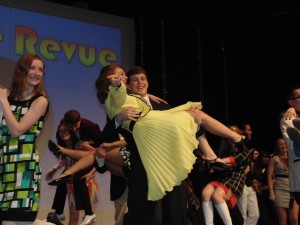 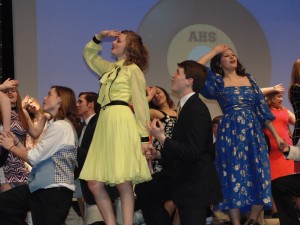 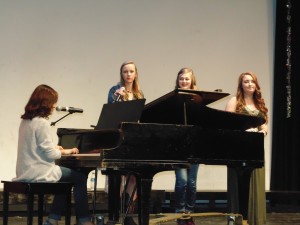 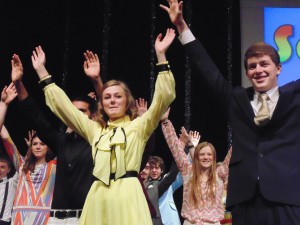 Before and after the water song, Valerie was all smiles and even a few laughs while she sang and danced with her choir mates to a bunch of Motown Classics that all the kids think are cool again. Nice. We love watching our girls do things they really enjoy and that they’re really good at. Watching Valerie sing is one of those great joys for her parents.