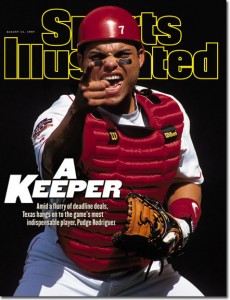 It was disclosed last night that Pudge Rodriguez, arguably the greatest catcher in the history of baseball, is going to sign a one day contract with the Texas Rangers and then officially retire as a Ranger in a ceremony Monday at the Ballpark in Arlington. A 14-time All Star and winner of a record 13 Gold Gloves as a catcher, Pudge was a highly respected and even feared defensive catcher. But he also won six Silver Slugger awards for his offensive prowess. During his twelve full seasons in Arlington, Pudge hit .305 with 215 HRs and 829 RBIs. And from behind the plate he could nail would-be base stealers at second and pick off straying opponents at first and third as effortlessly as you and I sneeze.

Whitney and I were at the Ballpark on a June night in 2009 when Pudge, then playing for the Astros, tied Carlton Fisk for the most starts by a catcher in MLB history. We gave Pudge a standing ovation when he hit a solo shot to cut Texas’ lead to 6-1. I doubt he would have received the same level of love from the crowd if his blast would have meant something for Houston that night. But we always loved Pudge Rodriguez. Anybody who ever watched him play loved Pudge.

One question: shouldn’t he be catching the ceremonial first pitch before the Yankees game Monday instead of throwing it?

We’re reviewing together in this space Leroy Garrett’s book “What Must the Church of Christ Do to Be Saved?” Again, it’s a collection of essays Garrett penned almost twenty years ago to address our future relevance within the broader scope of Christianity. Our kids are leaving. Our members are checking out. Our congregations are shrinking. We live in an increasingly post-denominational, post-Christian world in which the disciples of Jesus who remain exhibit little if any “brand loyalty.” What are the Churches of Christ to do?

Find out who the real enemy is.

One only needs to read our church papers to see that for the most part we are fighting each other. Or if one listens to a lot of our sermons and reads our tracts he may conclude that “the denominations” are the enemy. Of if our argumentative spirit is not satisfied in any other way it is some “straw man” that is the enemy. Then there is the long history of our debates. We started out debating “the sects.” When they would no longer debate us we started debating one another.

I remember reading about the debates and studying the debates as a young boy. I remember the books containing transcripts of the debates and detailed analysis of the debates on the bookshelves in my grandparents’ house. Unfortunately, those are not just awful memories from the past. Debate and accusation and name-calling still take place today within large segments of our Church of Christ heritage. I’ve seen the videos of these Church of Christ conferences that blast away at the authors of recent Christian books and call them heretics and godless rebels. I’ve read the articles. I’ve seen the websites. I’ve heard the speakers at certain lectureships rail with much fanfare against their own brothers and sisters in Christ, denouncing their own as arrogant and adulterous apostates who’ve sold their souls for public attention and worldly status. Within our own stream of the faith we can get so riled up and so passionate and so energetic about ripping those who don’t see everything the same way we see everything to absolute shreds. It’s sick. It’s sinful.

The good news is that it’s not like that everywhere. I pray those kinds of events and websites and articles and publications and conferences are fading. Quickly. Please, Lord, quickly.

The apostle Paul claims that the real enemy is Satan. “Our struggle is not against flesh and blood, but against the rulers, against the authorities, against the powers of this dark world and against the spiritual forces of evil (Ephesians 6:12). Other people are not the enemy. Especially fellow Christians! Why is it that we cannot get as worked up, we can’t get as passionate or spend as much energy fighting the devil who is destroying us?

I believe these fights among ourselves is really a genius destraction sent by the devil to keep us from effectively spreading the Good News of the Kingdom of God. While we’re focused on destroying one another over corporate worship practices and communion details, Satan himself runs roughshod through our families and cities and churches. He’s going unchecked because we’re wasting all our time and energies on checking one another.

Granted, Jesus’ own apostles struggled with the same thing. They ran across some guy casting out demons in Christ’s name and told him to cut it out because he wasn’t doing it exactly like they were taught to do it. Jesus rebuked his disciples for that move. He said, in essence, “Just because they’re not with you doesn’t mean they’re not with me. Whoever is not against us is with us. Leave him alone!” (Mark 9:38-41)

That other guy was doing it differently, he hadn’t been properly vetted by the apostles; he hadn’t filled out the hundred-question survey, his orthodoxy hadn’t been firmly established. But he was fighting Satan. He was driving out demons. He was actively pursuing the mission of Jesus in fixing in the world all the things that were wrong. And Jesus commended him for it and chastised his apostles for bothering him.