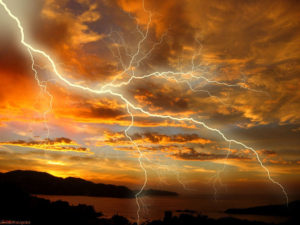 In Luke 10, Jesus sends out 70 of his disciples. He sends them to every town and place, it says, to declare the Kingdom of God is here. He sends them with his power and authority: “Whoever listens to you listens to me.” And they go and they testify and they proclaim, “The Kingdom of God is here!” And they’re blown away by the power of their testimony. They return to Jesus with great joy. They’re amazed by the response to their witness, “Lord, even the demons fall down to us in your name!”

“I saw Satan fall like lightning from heaven.” I sent you out to go with my authority. And when you proclaim my truth and declare my Kingdom in my name… I saw it. Satan falls.

And now Jesus is overcome with joy by the Holy Spirit and he thanks God in prayer, “I praise you, Father, Lord of Heaven and Earth.”

And then he says to his disciples:

We are so blessed by God to be alive today during this particular time. We are so supremely privileged to be alive during this current chapter of God’s story. Right now, today, we are living during the last days of the in-breaking of God’s Kingdom. Because of the pouring out of God’s Spirit on all people, through the Church, we get to see things and experience things nobody else got to. We get to participate as co-workers with God as he restores and redeems his creation. We get to experience God’s Spirit moving into and re-creating people. We get to watch as God moves into a place and reclaims it for his glory.

Our God gives us the opportunity to join him in creating new possibilities, in changing the potential in people’s lives, in participating in his new creation. We are highly favored by our Father!

The prophets gave us the beautiful vision from God: You will be a light to the nations, to open eyes that are blind, to free captives from prison, to release those who sit in darkness. The prophets gave us the glorious mission from God: I will make you a light for the nations that you may bring my salvation to the ends of the earth. And now WE get to be that light! He’s chosen US to shine his light!

Here at Central, we’ve seen that chapel that was built in 1929 become a sacred space for five generations of Christian worship and countless numbers of baptisms and weddings and funerals and a launching pad for nearly 90 years of Gospel ministry. We’ve seen it.

We’ve seen a modest commitment to Ted and Dot Stewart back in 1961 turn into Great Cities Missions and thousands of new Christians in a hundred new churches in dozens of cities in Latin America. We’ve seen it.

We’ve seen the Upreach Center, the house Central reclaimed and redeemed in 2001, become an outpost for Loaves and Fishes, CareCentral, and Prayer Breakfast, compassionate ministry and outreach to the poor that was un-thought of twenty years ago and continues to grow today. We’ve seen it.

Just in the past year-and-a-half, we’ve seen God change the Route 66 strip club into The PARC where our city’s homeless are being gathered into Christian community around morning Bible studies and prayer in a context of God’s limitless love. We’ve seen the Planned Parenthood building become the regional headquarters for CareNet, where unwed mothers are taught that every human life is precious to God and devastated families are given love and support and resources in the manner of Christ.

We can join our Lord in declaring together, “We see  it!” We see Satan fall from the sky! Praise God, we get to see it and experience it; we actually get to participate in it. The great prophets and Israel’s kings and the angels in heaven are jealous. Who knew God believed you and I were so special!