“First let the children eat all they want,” he told her, “for it is not right to take the children’s bread and toss it to their dogs.” ~Mark 7:27 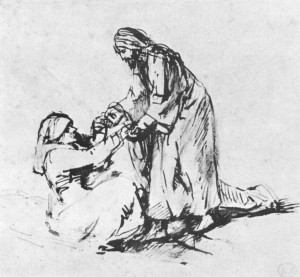 The way Jesus talks to this woman always messes us up. It’s fine for Jesus to be rude to Pharisees and Saducees. They deserve it. We even cheer at Jesus’ harsh words to the religious establishment… until we realize he’s talking to us. But it’s just not like him — it’s not Christ-like — for him to be rude to this woman who’s genuinely coming to him for help. It doesn’t make sense. It offends us.

Now, I do think Jesus is doing something deliberate here. And I think Mark is bending over backwards to show it to us. I believe Jesus is re-stating the salvation plan: first for the Jew and then for the Greek. And as he’s saying it, he’s demonstrating that the “then” is right now! He heals this Gentile woman in this Gentile land. And then our Lord immediately takes off for the Decapolis, ten pagan Gentile cities on the east coast of Galilee. And he heals. And then he feeds four thousand Gentiles in a Gentile desert. What Mark is saying in this section of his Gospel is that now it’s for everybody. The power of the Kingdom of God is for all people. You do not set any limits on the universal reach of the Savior of the World.

But sometimes that wonderful news overshadows the great humility of this desperate woman. And I believe Mark wants us to pay attention to that, too.

Jesus calls her and her people “dogs.” There’s no getting around it. And this woman doesn’t argue. She accepts the Jewish priority as explained by Jesus. She concedes the difference between the children and the dogs. And she humbles herself as a dog in order to accept healing from the Lord.

Her attitude is key. It’s necessary if one is going to be a true disciple of Jesus.

She comes to Jesus empty handed. She makes no claim. She has no merit. No priority. No standing. No privilege. She has nothing to commend herself to Jesus. She is in no way deserving of his mercy and healing. She does not argue that her case is some kind of special exception. She doesn’t lobby for special treatment. She completely accepts his judgment and bows down before Jesus as a beggar.

This willingness to humble oneself is a key requirement for discipleship. And it’s a lesson that Jesus’ own hand-picked apostles had a difficult time learning. Her attitude is the opposite of the apostles’ who are always arguing about who’s going to be the greatest. This woman is not bitter about the privileges of others. She doesn’t resent others’ shares of God’s blessings. She accepts her place and she comes to Jesus, just like we all must, as a sinner, poor and needy. She accepts that she’s unacceptable. Just like me. Just like us.

Pride, though, is our huge problem. Augustine said pride is what changed angels into devils. Pride is what causes us to thumb our noses at the God who insists we are unworthy. “I’m not a dog! I’m not weak! I’m not incapable! I’m not undeserving!” We’re offended. And we walk away from the Savior.

But not this woman. No, sir. This woman understood very well what Romans tells us, what all of Holy Scripture tells us: we are rebels and enemies of God, sinful and diseased, dead and powerless. In all humility she accepted that status, and received from Christ the healing and salvation she and her family so desperately needed. She is the perfect model of what it means to be last of all, to bow low and submit to the gracious King.

Don’t believe for a second you’re not a dog. You are. Don’t change the words in the song from “…such a worm as I” to “…such a one as I.” Don’t. You are an unrighteous, unholy, sinful, dirty human being in desperate need of a Savior. And he has come. And he loves you more than you can possibly begin to imagine.