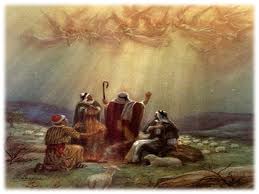 Scripture tells us clearly that our God is one and that God created with his Word everything that is and he calls it good. God loves his creation. He delights in nature. And in response to that love and delight, all of creation sings praise to God. Heaven and nature sing.

Psalm 148 — the title to the song is “Praise the Lord” — is the most obvious example of this. The psalm is divided into two parts. The first half begins with “Praise the Lord from the heavens” and mentions heavenly bodies and creatures that worship God in song: angels, heavenly hosts, sun, moon, and stars. The second half of the psalm begins “Praise the Lord from the earth” and lists the things of nature that sing to God: great sea creatures, lightning, hail, snow, clouds, winds, mountains, hills, fruit trees, cedars, wild animals, cattle, small creatures, flying birds, kings, all nations, princes, young men, maidens, old men, and children.

“Let the heavens rejoice, the earth be glad; let the sea resound, and all that is in it; let the fields be jubilant, and everything in them. The trees of the forest sing for joy; they sing before the Lord, for he comes.” ~Psalm 96:11-13

The foundational first act of the Story of God is that the Father created the world and everything in it. He loves his creation. God blesses his creation. And at the very center of the Story is the Incarnation. This is our bedrock Christian belief: God so loves the world that he becomes part of it. God Almighty puts on our flesh and blood and comes to his world to bless the world and redeem the world. Incarnation is a confirmation of the world. God comes to this earth in the form of a human baby. And that says something important about the sacredness of creation, how important the world is to God, how valuable to God is the human life into which he came. God is not too good to join us right here. He is not too high and mighty, God is not too holy or proud to come to us on our level and to participate in this earthly human life.

And it really happened.

In this baby Jesus we have God With Us. Immanuel. He came to us. God came here to his creation. And it’s not just a beautiful idea or an abstract theological truth. When we consider God coming to us in the baby Jesus, we’re not talking about a “feeling” of God’s presence or something in our hearts. It really happened. It’s history.

And when it happened…

“A great company of the heavenly host appeared with the angel, praising God and saying, “Glory to God in the highest, and on earth peace to all people!” ~Luke 2:13-14

“The shepherds returned, glorifying and praising God for all the things they had seen and heard.” ~Luke 2:20

God comes to his creation, he comes here to bless his creation and to live among and redeem his creation. And both heaven and nature sing. Both mighty angels and lowly shepherds sing.

Joy to the world, the Lord is come, let earth receive her King.
Let every heart prepare him room, and heaven and nature sing!