Greetings from the Holy City 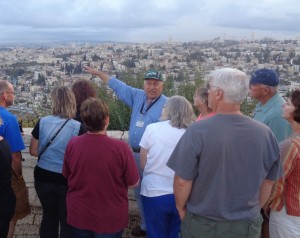 The group arrived in Jerusalem late this afternoon wearing sandals and shorts after hiking in the Judean Desert for most of the day to be greeted by a blast of super cold air and a strong north wind. It was just enough — well, honestly, the massive dinner buffet also helped — to get us ready for our last three days of sight seeing here in the Holy City.

We started today at Masada, Herod’s desert palace and fortress at the top of a plateau mountain just east of the Dead Sea. This is Israel’s “Alamo” where 967 Israelis holed up after the Roman Empire crushed Jerusalem and burned the temple in 70 A.D. It took three years, but the Roman army finally built a siege ramp on the west side of the mountain, marched to the top, set fire to the walls, and stormed the fortress, only to discover that every family inside had decided the night before to commit suicide rather than become slaves of the Romans. A sacred sight, for sure. Instead of riding the cable cars down, thirteen of us made the decision to descend the mountain by the ancient Serpent Path, a winding, rocky, steep, narrow trail that, up until the time of the siege, was the only way to get up and down Masada. When the strenuous hour-long hike was over, most of us still felt it was a good idea. 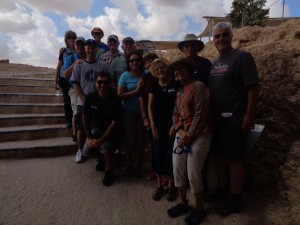 After Masada we visited En Gedi, the beautiful and surprising oasis in the desert where David and his 600 men hid from King Saul. It was in one of the more than three thousand caves of En Gedi where David moved to cut off the corner of Saul’s robe instead of take the life of the Lord’s anointed. There are dozens of running streams and pools and several waterfalls that take a lot of hiking and climbing to get to. But the payoff is worth it. 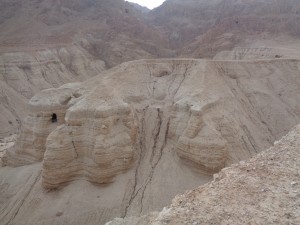 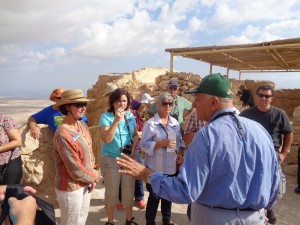 After En Gedi we spent about fifteen minutes at Qumran, the sight of the discovery of the Dead Sea Scrolls before a huge rain shower blew in. And then we found the camels. 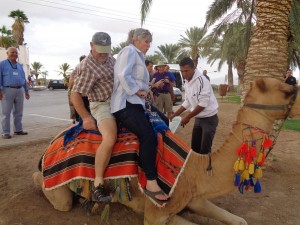 The camels were on a grassy area on the highway just north of the Dead Sea. Three teenage boys were selling short rides on the camels for five dollars each and when we asked our driver, Muhammad, to stop, he did. And just about every one of us did it. 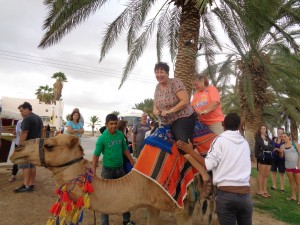 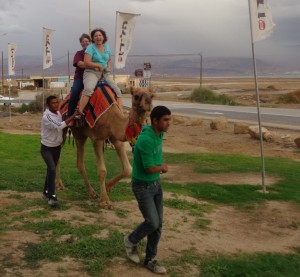 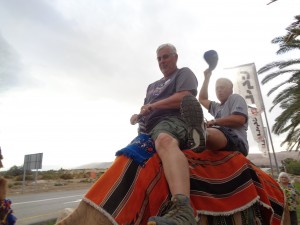 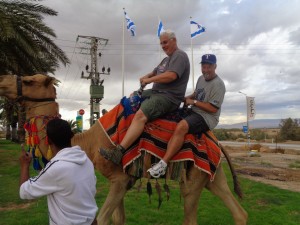 Now we’re in Jerusalem for the final leg of what has been a truly wonderful experience. We’re still to see the places of our Lord’s birth, death, and resurrection; the sights of his miracles and his teachings; the temple mount where he worshiped and sang; the garden where he prayed and was betrayed. We’ve already done so much and experienced so many wonderful and unforgettable things. But, seriously, the best is still to come.