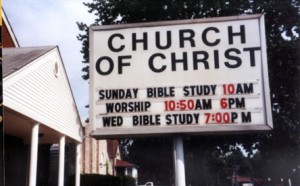 We’re exploring chapter by chapter Leroy Garrett’s “What Must the Church of Christ Do to Be Saved?”  In our increasingly post-denominational, post-Christian world, Garrett writes that we must make some significant changes if we are to remain a truly viable tool for God. The fifteenth of those suggestions is to center and focus our preaching and teaching and living on salvation from God in Christ, not on church ordinances and church histories and church rules.

Discover the Good in the Good News

Garrett points to the New Testament sermons of Peter and Paul and observes that they were centered on Christ and him crucified. They were all about God’s grace and his free gift of eternal life in the risen Jesus. New Testament sermons are about God’s great love as it’s revealed in the life, death, and resurrection of his Holy Son. That’s the Gospel! That’s the Good News! Jesus died for the sins of the world to redeem the world back into a righteous relationship with God!

Garrett says it’s wrong to preach sermons about baptism for seven straight nights and then call it a Gospel Meeting. But that’s what we’ve done.

Recent studies by some of our own scholars reveal that there has not been much good news in what we have called “gospel preaching.” In a 1988 article in the Gospel Advocate, F. W. Mattox explains that Church of Christ preachers have left it to “denominational preachers” to preach grace, faith, and the atonement while they “went about straightening out their misunderstandings of the place, action, and order of faith, repentance, and baptism in obtaining church membership.” Mattox notes that while others preached the atonement of Christ but not baptism, we preached baptism but not the atonement of Christ.

Garrett cites a study conducted by Bill Love in which Restoration Movement sermons from the early 1800s through the 1950s were analyzed for content. Compared to the 33 sermons found in the New Testament in which all 33 centered on the atoning death and resurrection of Jesus, our own Church of Christ sermons are embarrassingly weak. Love found the cross and empty tomb mentioned in only 25-percent of the hundreds of sermons he studied.

According to Love, 56% of the sermons during the Stone and Campbell generation contained the Gospel. But that number falls to 23% during the G. C. Brewer and Foy Wallace era. In the first two generations, before the Churches of Christ became a separate group, preachers referred to the cross an average of 52% of the time. Since then, the rate falls to 25%. Love’s conclusion is that “our focus moved from Christ crucified to his church, a subtle but destructive shift. Once our sickness took hold, we grew weaker and weaker, more and more anemic. Without the gospel, we lost the source of our faith.”

Yes, I’m afraid we have been guilty of diligently studying the Scriptures and believing that by them we have eternal life. At some point, sooner not later, we need to start preaching and teaching again that salvation is not found in the Bible, it’s found in the One to whom the Bible points. Forgiveness and reconciliation and eternal life are not found in the church, but in the One the church worships and serves. We’ve been guilty of maintaining a religion when we should have been maintaining a relationship with the Savior of the world.

More to Garrett’s point, he closes this chapter by claiming there are two “gospels” we can preach:

Let’s preach the glorious good news. God has saved you through Christ, taking away all your sins. Won’t you accept it through faith and baptism?