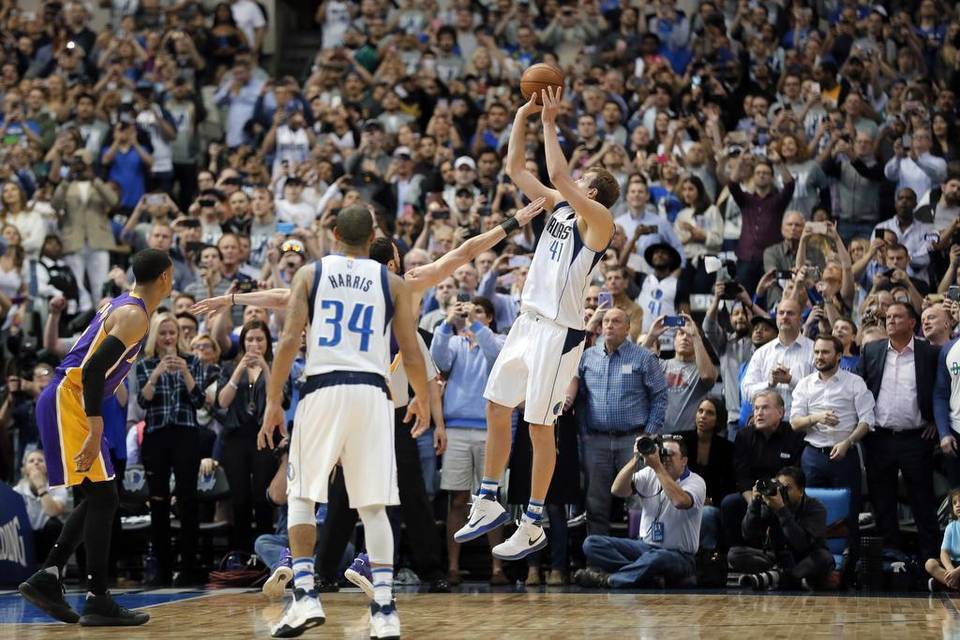 Dirk Nowitski’s name belongs now and forever way up in the rafters alongside the names of Kareem, Kobe, M.J., and Wilt. In last night’s wire-to-wire home win over the Lakers, the Big German scored his 30,000th career NBA point on his signature fade away jumper from the baseline. With a hand in his face. His typical flair for the moment captured by more than twenty thousand cell phone cameras and sealing his place among basketball’s storied immortals.

Dirk is a league MVP, a playoffs MVP, and an NBA Champion. He revolutionized the game by becoming the greatest international player in history and by creating a new position: “stretch forward.” His dedication to his craft is legendary. His work ethic and toughness are inspirational. But it’s his loyalty to the Mavericks and the city of Dallas that makes him eternally heroic.

Dirk is only the sixth player in NBA history to rack up 30,000 points. He and Karl Malone and Kobe Bryant are the only three to do it with one team. Nowitski began his career against a team that doesn’t even exist anymore: the Seattle SuperSonics. He began his career in a building that doesn’t exist anymore: Reunion Arena. But he’ll finish his twenty or twenty-one year career with the Mavericks. In Dallas. And for that, he’ll own the city for as long as he lives. 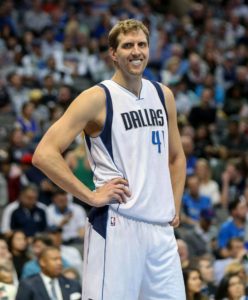 He’s Roger Staubach in shorts and high tops. He could run for Mayor of Dallas tomorrow or fifteen years from now and win. He’s Dallas royalty. He’s lived and died with the Mavericks and their fans. He’s suffered through lottery seasons and won championships. He’ll be cutting ribbons and raising money and serving on boards and advocating for the city for the rest of his life. He can do no wrong in Big D. Forever.

Kevin Durant could have had the exact same thing in OKC. But he chose to chase rings in Oakland with the guys who beat his Thunder. And he may never recover. I don’t see a LeBron-Cleveland reunion culminating in a title and renewed hero status for K.D. and Oklahoma City.

There’s something noble about staying with your team, remaining with your city, battling year in and year out, experiencing the highs and lows, working hard to build something and accomplish something, regardless of the changing circumstances around you. Dirk has done that and he’s achieved the great status he deserves.

And he’s just so stinkin’ likeable. Who doesn’t love Dirk?

I remember in 2004 or 2005 when Dirk became an on-line relationship advice columnist for a local Dallas paper. It was a promotional thing, kind of clever, but it was a joke. Everybody was making fun of it, and, true to his nature, he was having a good time with it. My talk show producer, Eric Gray, and I wanted to record a bit in which we would ask Dirk to give us advice for our troubled on-air relationship, to help us with the interpersonal problems we were having. It was a gag. A big joke. The questions were loaded for laughs and Dirk agreed to do it. We were in a crunch for time — the Mavs were leaving for a four game road trip — and if we didn’t record the bit after the next home game it would be two weeks before we could try it again.

So, the day of the game we set it up with Dirk to record the fake interview afterwards.

I can’t remember who they played. I can’t remember if they lost at the buzzer or got blown out. But they were expected to win and they got beat. The locker room was quiet. The mood was sour. Nobody was making jokes or laughing.

And after we all finished with our official interviews and the locker room had mostly cleared out, we approached Dirk about the relationship advice bit. He remembered. I told him we could wait and do it another time. But he said, “Y’all need it tonight, don’t you?” We did. And he did it.

It wasn’t great. He wasn’t in a good mood. We asked the silly questions and he tried to be funny with us. He tried. And it didn’t really work. We wound up not using it because it didn’t turn out right. It was forced. But he still went through with it. He tried. And he didn’t have to. That’s the kind of guy Dirk is. Friendly. Funny. Never takes himself too seriously. And true to his word, regardless of changing circumstances. 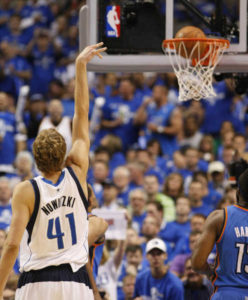 People ask me all the time if I miss covering sports for Dallas radio. The answer is that I miss being there for the big moments. I was on the ice and in the dressing room with Mike Modano and Derian Hatcher when the Stars won those two Western Conference Championships. I was on the sidelines and in the locker room when Emmitt Smith surpassed Walter Payton as the leading rusher in NFL history. John Wetteland poured champagne down my shirt in the Rangers clubhouse when they clinched the division in ’99. And I was there when Dirk lost the tooth in that playoff game against the Jazz and then led the Mavs to an improbable victory and the series win. I was there for all those Western Conference Championship Series games against the Kings and the Spurs. I’ve had political conversations with Steve Nash, I’ve been the target of a sarcastic comment from Shawn Bradley, I’ve played three-on-three hoops with Donnie Nelson and Derek Harper, and I’ve had Don Nelson threaten to kick me out of his office during a misunderstanding. I’ve been chewed out by Johnny Oates and apologized to by Buck Showalter. I’ve gotten into a nationally-televised argument about two-point conversions with Bill Parcells and I’ve watched an episode of Seinfeld with Pierre Turgeon before a playoff game. I miss the access, maybe.

But I wish I could have been there last night.