“Yu Are Kidding Me!” 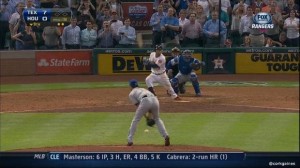 Go ahead and submit your best Skip Bayless headline for last night’s near-no-no-perfecto for Rangers pitcher Yu Darvish. He was unbelievable in Houston last night, coming within one out from only the second perfect game in franchise history. In the months leading up to Yu’s major league debut last season, we were all told that he had command of five different pitches. It seemed like hyperbole back then. Last night, it was reality. Yu did whatever he wanted to last night, mixing 94-mph heaters and 76-mph breakers with curves and sliders and another weird off-speed thing I’m not sure what to call. The Astros didn’t have a chance. Yu fanned fourteen, he was only hit hard twice that I saw, and he showed almost no emotion or effort in the process. He was cruising with just one out to go — two down, bottom of the ninth — when the Astros number nine batter in the lineup, a shortstop who spells his first name wrong, smashed the first pitch right back through the five hole. Base hit. Ruined the perfect game. Ruined the no-hitter. Darvish came within two inches of blocking the liner between his legs, but the bid for perfection was over.

Darvish is good. Oh, my word, he’s good and he’s fun to watch. He’ll be on again this coming Sunday night on national TV against Josh Hamilton and the Halos. He may never get that close again to a no-hitter. Or he may wind up throwing three or four in his career; right now he looks that good. Either way, just like last night, if and when it happens, Whitney and I will be hanging together on every pitch.

Our Sunday morning adult Bible classes here at Central are discussing Holloway and Foster’s “Renewing God’s People: A Concise History of Churches of Christ.” Chapter four introduces us to Thomas and Alexander Campbell, a father and son team of Scottish Presbyterian ministers who sailed to America in 1807-1809 with hopes of restoring God’s Church. Like Barton Stone, they longed for Christian unity. They despised denominational labels and divisive creeds. They viewed the different Christian sects as abominations and affronts to the true Gospel of Christ. Campbell began an inter-denominational Bible study group that grew into what they called the Christian Association of Washington, Pennsylvania. They were committed to Christian unity, to renouncing all man-made creeds and following the Bible only, and to abolishing all distinctions between denominations. In 1809, the group commissioned Campbell to write a document outlining the purpose of their organization and its plan for unity among all Christians. So he penned the Declaration and Address, the most widely known of our Church of Christ founding documents.

Doug Foster has re-written the document’s thirteen propositions into today’s contemporary English, which makes navigating the text a little easier. You can find it by clicking here.

It would be really easy to write a different blog post for each of the thirteen statements. They are that rich, that good. I may do that someday. For our purposes today, allow me to hit just a few highlights.

Definition of God’s Church -Proposition One attempts to lay the ground rules for determining who’s in and who’s out. According to this opening idea, the Church is made up of everyone “who has faith in Christ and is trying to follow him in the ways God’s Spirit in scripture has told us, and who others can see are being transformed into his likeness by the way they act.” Notice, there are only two or three requirements Campbell says are necessary to being considered a member of Jesus’ Church. If one puts his faith for salvation in God through Christ, is actively submitting to the Lordship of Jesus and following him, and is obviously bearing Holy Spirit fruit, he’s in! Proposition Eight restates the idea in a little different wording, reminding that “having an understanding of every Christian truth is not a requirement to be a Christian, a part of God’s Church… All a person needs to know to be a part of Christ’s Church is that they are lost and that salvation is through Christ. When they confess that they believe in Christ and that they want to obey him fully according to his word — nothing else can be required.” Similarly, Proposition Nine identifies brothers and sisters in Christ as those who “confess belief in Christ and commit to obey him and who show the reality of their commitments by the way they live.”

Christian Unity – Proposition Two admits that it’s impossible for all Christians all over the world to physically worship and serve together, so there have to be local groups of disciples in a variety of different cultures and contexts. “These groups will not all look think, or act alike,” Campbell writes, “yet they are all part of Christ’s Church and ought to recognize it. They must accept and embrace each other just as Christ has accepted each one of us.” How do you achieve Christian unity? How do you bring people together who don’t believe or practice their Christianity exactly alike? Campbell says by obeying the “Rule of Christ.” These Christians from different backgrounds, in different places, with different ideas and practices should be “willing to give themselves for those Christ died to redeem.”

Against Division – The strongest language in the Declaration and Address comes in Proposition Ten which prohibits the dividing of Christ’s Church into denominations: “Division among Christians is a sickening evil, filled with many evils. It is anti-Christian because it destroys the visible unity of the Body of Christ. It is as if Christ were cutting off parts of himself and throwing them away from the rest of his body! What a ludicrous picture! Division is anti-scriptural, since Christ himself specifically prohibited it, making it a direct violation of Christ’s will. It is anti-natural, because it makes Christians condemn, hate, and oppose one another — people who are actually obligated in the strongest way to love each other as sisters and brothers, just like Christ loved them. In other words, division repudiates everything Christianity is supposed to stand for.” The following proposition claims that divisions and corruptions in the church are a result of neglect or a misunderstanding of God’s will that we have the mind of Christ and be transformed into his holy image. A secondary reason is that some Christians assume they are right in their beliefs and practices and try to “impose their conclusions on others as terms of recognition and fellowship.”

Interpreting the Bible – Another major theme running through the Declaration and Address is the correct way to read and interpret the Bible. Campbell upholds both the Old and New Testaments as essential parts of God’s holy Word and the only authority over God’s Church. Therefore, Proposition Three maintains “nothing should be required to recognize, fellowship, embrace, work, worship, and be fully and visibly united with all Christians that is not specifically made a requirement by God in the Word.” But he makes it very clear that, as a friend of mine once said, “The Bible is not a cook book of recipes, it’s a description of a great feast.” In Proposition Four, Campbell states that the “Bible is not primarily a constitution that functions as a legal document to consult in legal disputes. It is, instead, the sword of the Spirit; it is a place where we encounter God’s Spirit and are transformed increasingly into the likeness of Christ.” So, “The Bible does not spell out in detail everything Christians are supposed to think, do, or be — that is just not the nature of Scripture,” according to Proposition Five. “When there are specific actions Christians are told to take, there is almost never a set of detailed requirements for how to do it.”

It’s a powerful document. Strong. Rich. Inspiring. The American Restoration Movement, of which Churches of Christ are a part, is founded on this document. I hope someday to have a really nice copy of these thirteen propositions, in their original 19th century language, framed and on display in a prominent place in our church building. We need to be reading these things. We need to be compelled all over again by the same passions for Christian unity for the sake of the world that drove our ancestors. We need to repent of the evil divisions among Christian denominations that have proclaimed a most anti-Christian message to the world for centuries. We need to pray for a revived interest in the unity of all disciples for the everlasting purposes of the Kingdom of God. And we need to work — man, we need to work — to sacrifice and serve, to accept and forgive, to tear down walls and break down barriers between us so the world will finally see that our Prince of Peace really is who he claims to be.