During Eddie Wynn’s funeral yesterday, I must have heard at least a dozen phones go off at 3:18. “Yet I will rejoice in the Lord!” I was informed later by three or four others that there were dozens of phones beeping and buzzing all over the worship center at Comanche Trail. In the middle of a funeral. Hey, what better time or place? 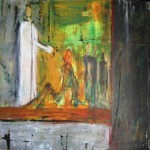 “The Church exists to set up in the world a new sign which is radically dissimilar to the world’s own manner and which contradicts it in a way which is full of promise.” ~Karl Barth, Church Dogmatics, 4.3.2

Oh, my word, we get so caught up in the politics of this world. The time we spend listening to talk radio and watching our own cable network’s spin on the news of the day, the energy we use extolling the virtues of our party or candidate and bashing the policies and platforms of the opposition, the ways we engage so passionately in debate betray a troubling preoccupation with the methods and means of an Empire to which we are not citizens. Yes, as children of God, we are rightly concerned with social injustice, disease, violence, war, crime, death, poverty, abuse, and all the effects of sin on his creation. But, as citizens of heaven who declare Jesus as Lord, not Caesar, we are called to join him in redeeming his creation in his name and by his manner.

Someone — I can’t remember who — once either told me or wrote in something I read that we are not to conform to the world, we are to convert the world.

Yeah. We don’t use the world’s ways; we use God’s way. And God’s way is by his Church.

“The most interesting, creative, political solutions we Christians have to offer our troubled society are not new laws, advice to Congress, or increased funding for social programs. The most creative social strategy we have to offer is the Church. Here we show the world a manner of life the world can never achieve through social coercion or governmental action. We serve the world by showing it something that it is not, namely, a place where God is forming a family out of strangers.

The Christian faith recognizes that we are violent, fearful, frightened creatures who cannot reason or will our way out of our mortality. So the Gospel begins, not with the assertion that we are violent, fearful, frightened creatures, but with the pledge that, if we offer ourselves to a truthful story and the community formed by listening to and enacting that story in the Church, we will be transformed into people more significant than we could ever have been on our own.” ~ Stanley Hauerwas and William Willimon, Resident Aliens, p. 82-83

Last month, when the movers were re-locating our furniture from the apartment to our new house, the driver of the huge truck asked me, “Do you think it’s OK for preachers to preach about politics in the pulpit?”

I answered, “I preach politics every single Sunday!”

We are citizens of the Kingdom of God. Our King is the risen Christ. Our allegiances are to him and his sovereign rule over every aspect of our lives. Thank goodness I’m not dependent on the sinful ways and means of this world’s governments for my well being. Thank goodness I’m not counting on this world’s leaders for my safety or security or sanity. Hallelujah, our God reigns! And he is redeeming the world in ways that make no sense to those who are driven by power and control, compelled by money and status, motivated by force and threat.

We belong to a polis. And, as our King says, it is not of this world.

Huge rivalry basketball game tonight: Amarillo High at Tascosa. Whitney and I are going to take in the JV boys at 5:30 (let’s see what Braden’s got), the varsity girls at 6:30, and then the headliner varsity boy’s contest at 7:30. If the Sandies (20-3, 4-0) win it tonight, they’ll clinch a playoff berth in District 2-5A. This AHS team seems to be pretty good. They’ve got nine lettermen back from last year district champs, eight seniors on the team, and lots of big game experience.

I’m also interested to watch my friend Bret McCaslan tonight. The man puts himself in a position to act like Christ every Tuesday and Friday night. He intentionally places himself in harm’s way, he subjects himself to ridicule and humiliation, he makes himself vulnerable to the violence and hatred of the masses. He’s a high school referee. He’ll be in the middle of a crazy scene tonight, and in position to occasionally become the focus.