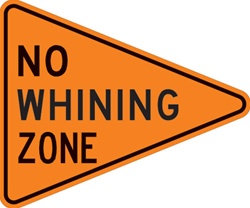 “Do all things without complaining or arguing.” ~Philippians 2:14

The Greek word in the original text is panta: all things, everything, total, complete, whole, every kind of, all of it, the whole enchilada. No matter how you translate it, there’s not one part of your life as a disciple of Christ that is not implicated here. Most of us, I think, are pretty good at doing most things without complaining or arguing. Most of us. But all things? Everything?

Just so you’re fully prepared for what is about to follow, here’s the whole text:

“Do all things without complaining or arguing, so that you may become blameless and pure, children of God without fault in a crooked and depraved generation, in which you shine like stars in the universe as you hold out the word of life.” ~Philippians 2:14-16

Paul takes complaining and arguing very seriously. According to the apostle, God’s purpose for you, what God is working in you, what transforms you into blameless and pure children of God, what allows you to shine like stars as a powerful witness to the difference he makes in the lives of his children, which is God’s whole plan for you — all of that begins with “Do all things without complaining or arguing.”

When you’re complaining or arguing, your Christian witness is hindered, if not completely destroyed. You have no credibility with the world.

You claim to be a child of the sovereign Creator of heaven and earth, you claim to be a subject of the eternal Lord who has defeated sin and death and Satan and reigns right now today at the right hand of God, you claim to be a citizen of heaven, a citizen of the Kingdom that cannot be shaken, you claim to belong to a God who promises to always protect and provide, but when you complain and argue you’re telling the world you don’t believe a word of it. Your behavior contradicts your belief. You live like those things don’t really matter, like they have no impact on your life. And it wrecks your testimony. Why would anyone think that your belief and your faith work for all the massive eternal questions, why would they suppose your allegiance to Christ and his Kingdom provides all the answers to sin and suffering and death, if it won’t even work at the Whataburger drive-thru or in line at the post office?

Sometimes I think we actually reward this godless behavior in the Church.

Church positions should never be formed and church decisions should never be made based on who’s going to complain. Church policy can’t be based on complaining or arguing because complaining and arguing have no place in the lives of God’s people, much less a prominent place in an important decision-making process. When we allow the complainers to dictate the direction — or non-direction — of the congregation, we’re honoring and rewarding the outright disobedience of one of God’s direct commands. It’s like finding a dozen people in the church who are suffering personal bankruptcy or presiding over failed businesses to chair the church’s finance committee and set the annual budgets. It’s the same as allowing six or seven guys who are currently cheating on their wives to teach the young marrieds class.

Why do we honor the complainers?

In Deuteronomy 32, the grumblers and complainers were punished by God. They were declared by God to not be his children anymore because of their complaining. Yet, so many of our church leaders honor the complainers by bowing to their grumblings when it comes to charting the direction of the congregation.

I would gently suggest that we all — panta all — pledge from this moment forward to take complaining and arguing as seriously as the apostle Paul does. Vow to stop doing it. Church leaders, promise to stop rewarding it.