Can We At Least Think About It?

“Our citizenship is in heaven.” ~Philippians 3:20 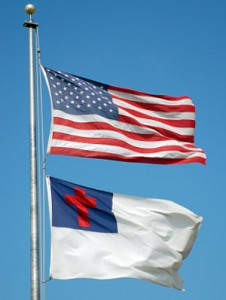 The Church gets into trouble, we fail to live up to our responsibilities, when we equate national politics with the politics of God’s Kingdom. When we view earthly power systems as helpful to the cause of Christ, or something to be used, we fall short of our calling. When the colony of Christ, of which we are citizens, views the national agenda and the national methods of achieving that agenda as compatible with the ways and means of our Lord, we’re in trouble.

But we don’t see it. Most of us don’t see the Empire as a subtle and seductive force working against God’s agenda. We don’t always view Caesar as actively seeking to destroy the work of our Christ. Because we’re so comfortable in this country, maybe. Because we have more than we’ll ever need, maybe. So we embrace the Empire as an ally, as something good that supports the Kingdom of God. In some cases, we even hold up Empire and Kingdom, God and Country, as if they are the same thing. We’ll talk like Christian values and American values are the same thing. Occasionally, we even give more to the conduct and culture of the Empire than to the conduct and culture of the Kingdom.

Can we think about why we take off our caps and sing the national anthem at a ball game, but we get nervous if somebody wants to lead a prayer before dinner at Chili’s? Can we at least consider why we’ll stand perfectly still at complete attention with our hands over our hearts for the pledge of allegiance, but the reading of God’s holy Scriptures in the worship center on Sunday appears to be a cue to walk around and talk? Can we at least pay attention to why we’ll take a half-day off work so we can clap and cheer and whistle when someone becomes a citizen of this temporary, worldly Empire; but we duck out of the building when someone’s being baptized to become a citizen of the holy and eternal Kingdom of God in order to save ten minutes getting to lunch?

I get the emails and the articles and the videos from Christians almost every week. Emails calling democracy and capitalism God’s will for the entire world. I got an email last fall equating a single vote for a particular candidate with Christ’s singular sacrifice on the cross for the sins of all mankind. Somebody sent me a slideshow last year that said defending our rights and freedoms by going to war is a great Christian value.

It’s so subtle, I guess. We don’t think about it.

“American preachers have a task more difficult, perhaps, than those faced by us under South Africa’s apartheid, or even Christians under Communism. We had obvious evils to engage; you have to unwrap your culture from years of red, white, and blue myth. You have to expose and confront the great disconnection between the kindness, compassion, and caring of most American people, and the ruthless way American power is experienced directly and indirectly by the poor of the earth. You have to help good people see how they have let their institutions do their sinning for them. This is not easy among people who really believe that their country does nothing but good. But it is necessary; not only for their future, but for us all.”

Can we at least think about it?