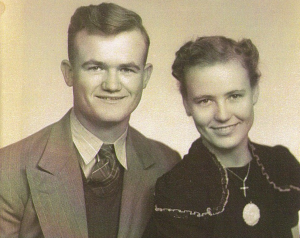 Do you know anybody who’s been married 75 years? Do you know a couple who exchanged their wedding vows before World War II? I wish you knew Odell and Doris Blasingame.

Odell and Doris were married November 23, 1940. She was sixteen and he was nineteen. He first saw her during a softball game. He was walking by, only mildly interested in what was happening on the field, on his way to somewhere else, when Doris hit a stand-up triple. He was so impressed that he said out loud to a couple of friends, “I’m going to marry her!” If you ask Odell today if he was more moved by Doris’ great beauty or by her athletic feat, he’ll answer, “Both!”

Do you know anybody who’s been married for that long? 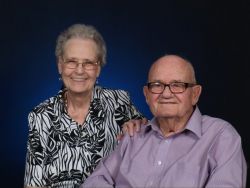 We know Odell and Doris. They are long, long, long time members here at Central, for almost thirty years. They are faithful in every sense of the word. Important. Beloved. Regular members of the Bible class I’ve been blessed to teach for the past six or seven weeks. Odell always tells funny stories and at least one prepared joke at the beginning of every class. Doris sits by his side and alternately grimaces and laughs. She pushes his wheelchair. He adores her and lavishes her with praise. There’s nobody who knows them who doesn’t love them.

We took the time during our worship assembly this past Sunday to honor this precious couple. Of course, they received a standing ovation that went embarrassingly long. We gave them a couple of commemorative T-shirts and I told the church a little bit of their story. When I told the softball story, I concluded by musing, “Even before their very first date, Doris was already at third base!” Come on, pick your jaw up off the ground; that’s a good line.

I asked Doris the secret to staying together for so many years and she said the key was to take everything one day at a time, to which she added, “And when you say ‘I do,’ that means forever!” When I asked them for any advice they wanted to give to the newlyweds of our church (those who’ve only been married for 30 or 40 years) Odell offered, “Just do whatever she says!” It was priceless. 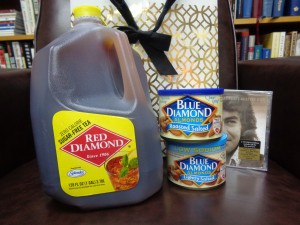 Since the 75th anniversary is traditionally the Diamond Anniversary, I told them that the church wanted to give them some diamonds. And I pulled the gifts out of a bag and handed them to them one at a time: one gallon of Red Diamond Iced Tea, two cans of Blue Diamond Almonds, and a CD containing forty two of Neil Diamond’s Greatest Hits.

We clapped again and several people walked over to hug Odell and Doris as I reminded the congregation of how blessed we are to be in the same church family as the Blasingames. We’re honored just to know these two. Their love and devotion to each other, the ways they support and take care of each other, the sacrifice and service they give to each other — it’s a true reflection of the love God has for his Son and the love Christ has for his Church. Their marriage is a daily expression of the Gospel. When people see their marriage, they see a living illustration of God’s faithful love and fidelity to his people. And it’s beautiful.

Congratulations, Odell and Doris. We love you so much. May the blessings of heaven continue to crown your marriage with increasing joy and peace.