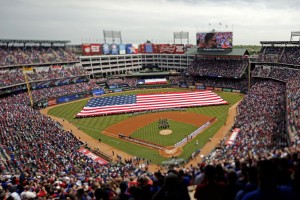 The sun is out, the grass is green, the Mesquite trees are finally now thinking about blooming, and Opening Day is here! Cole Hamels takes the hill at 3:00 this afternoon when the Rangers pop the top on the 2016 season against the division-rival Mariners. And hopes are riding much, much higher than they were last April when most everybody believed Texas would rack up 100 losses and finish in the cellar of the AL West. Somehow, incredibly, they won the division crown on the last day of the regular season and came without nine outs of making it to the AL Championship Series. But for three inexplicable errors on three consecutive plays — oh, man, that still hurts so bad! — the Rangers might be looking to defend more than just a division title when they open up the season today. It’s still a super young team with a healthy rotation, a brand new All-Star centerfielder, and experienced depth. And expectations are high. I’m not sure how you’re leaving work early today to catch the game. I have my own strategies and I’ve been laying the groundwork now for a couple of weeks. But here’s to Opening Day and a championship season for the Rangers.

To get you ready, here’s a link to a tidy little roundup of all the national sportswriters who are predicting great things for the Rangers. Several notable pundits believe Texas has everything needed to win the World Series.

This link takes you the Texas Rangers home page.

If you click here you get Evan Grant’s case for the Rangers starting hot this season as opposed to last year’s miserable early efforts that had them 7-1/2 games out before the end of April.

And, finally, all hard core Rangers fans know they have to check out the Newberg Report every day. But especially Opening Day.