I spent Saturday through Wednesday in Chicago on another of these nine quarterly retreats with Ruth Haley Barton’s Transforming Community. And while Mary and Hannah and I did some really great things up there, I’m struggling to get caught up with all the really cool things we missed here at home.

We always try to work in a fun event or two in Chicago as a needed balance to the oftentimes difficult self-reflection and introspection that happens on these retreats. We’ve been to a White Sox game, we’ve taken in the architectural boat tour (a lot more fun than it sounds), we’ve been to Harry Carey’s restaurant, and we’ve done the Bean downtown, Grant Park, and a comedy club. This time around we scheduled two things: the Chicago art museum and Hamilton. 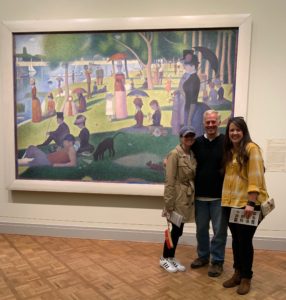 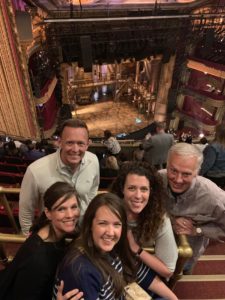 You know we had to get a picture with the Ferris Bueller painting and Hannah had to get reprimanded more than once for getting too close to the art. And then Tuesday we hooked up with Grace, who lives in California, and Phil, who lives in another part of Texas — they’ve both become great friends — and saw “Hamilton” together at the historic downtown Chicago CIBC Theatre. The words came way too fast for me, but what a show! I wish I could see it again because I know I missed a bunch of funny, clever lines. The moving stage, the creative writing, the over-the-top performances, the comedy, the history — very impressive!

So, while we were away, Virginia topped Texas Tech in overtime to win the national championship. That’s fine. Nobody wanted Texas Tech to win. Except Tiffani and George. And they finished first and second in our annual Central staff bracket contest. Bragging rights and a free lunch. And, yes, Tiffani’s guns are up all year around. Heading into the Elite Eight, I was in first place and still had all four of my Final Four teams alive. I just needed Duke or Purdue or Kentucky or Gonzaga to win. Just one of those four teams. Just one more win, it didn’t matter who it was. But they all four lost and I’m watching it from a tiny TV at Lou Malnati’s Pizza in Chicago.  Good thing I had that deep dish supreme to console me. Final numbers: Tiffani-75, George-72, Kevin-71, Allan-70. 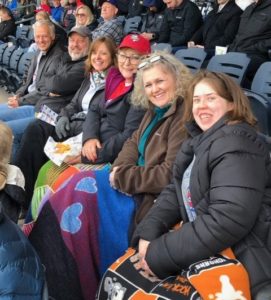 The Amarillo Sod Poodles opened up their inaugural home season in our brand new downtown ballpark on Monday. And I missed it! So we got there as fast as we could — last night — and watched our AA San Diego Padres affiliate beat the Corpus Christi Hooks in an entertaining slug fest. It was cold, too cold for baseball. But that’s always going to be Amarillo in April. It was 88-degrees on Wednesday and then 53-degrees yesterday. I’m going again Sunday when it’s supposed to be in the lower 70s. This is Whitney, Carrie-Anne, Karen, Mean Jean, Greg, and me trying to stay warm in Dale and Karen’s great seats behind home plate. What a beautiful ball park! I’m hoping to make about 30 of these games this summer.

I also missed Dirk Nowitski’s last game as a Dallas Maverick and I’ve had to go on-line to watch the stirring tribute the Spurs gave him in their arena in San Antonio. If you haven’t seen it, you must watch this video. I’ve always admired the Spurs as a classy organization with a lot of pride and professionalism. We’ve all come to expect that from the Spurs. But they cranked it up a few notches for Dirk’s last game. During the introductions, they showed a video of Dirk highlights, mostly of Dirk dunking on Tim Duncan and shooting over Tony Parker and faking out Manu Ginobelli — it was a highlight reel of Dirk beating the Spurs! How really cool and unexpected! The Mavericks and Spurs are bitter Midwest Division rivals and they have played some significant games against each other over the years. There was about a ten year period there where the stakes were incredibly high every time these two teams faced off. And the highlight reel brought Nowitski to tears. And if you have a heart at all, it’ll probably choke you up, too.

Lastly — man, this is sports-heavy today — the NHL playoff season has begun and the Dallas Stars are in. Wednesday night they came from behind to beat Nashville 3-2 in the best-of-seven opener and I watched every exciting minute of it. It’s been a while for the Stars and I forgot just how intense and crazy the NHL’s second season really is. Breath-taking. Edge of your seat. So much fun. It’s border-line blasphemous to say, but NHL playoff hockey is better than football. Game two is tomorrow. Go Stars.