Around the Table: Part 7b 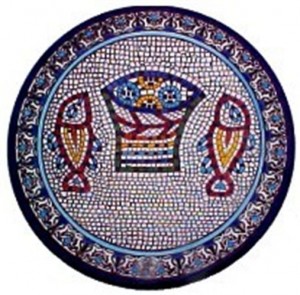 We’ve established that the term “breaking bread” (“klasas artos” or “arton klao“) was never used in the Greek language before the writings of the New Testament and that it always and only refers to Christ eating and drinking at the table with his disciples. The phrase was never used to describe an ordinary meal. It is a strictly Christian term used exclusively in a Lord’s Supper or communion context. Every time. At the very least, “breaking bread” echoes earlier meals with Jesus and / or reminds the Church of what’s happening on Sundays at the Lord’s Meal. But the context is always a joyful community meal shared in the presence of Jesus. Therefore, we are compelled, I believe, to read familiar portions of the New Testament a bit differently. I’d like to examine three of those passages from Acts in this space today.

Acts 2:42-47 – We in the Churches of Christ have all but memorized these verses. We proudly point to this passage as the origin of God’s Church, the first days of Christ’s global community of faith. “This is how the Church started,” we say. “This is the pattern, this is how we should act today.” And I agree. Along with Ephesians 4, this is where I begin talking about the Church in our orientation classes with visitors and new Christians here at Central. Luke ties “breaking bread” here to the fellowship of the Church. This passages is about community. Communion. Koinonia. Christianity is a shared experience, lived in community with other disciples where men and women share their meals and their possessions. Church is expressed here in concrete and visible terms, not just spiritual or mental or invisible. These new Christians are sharing their lives with one another. But are the two uses of “breaking bread” in verses 42 and 46 about the Lord’s Dinner?

Typically, we pronounce the use of the phrase in verse 42 to be about the Lord’s Supper (“They devoted themselves to the apostles’ teaching and to the fellowship, to the breaking of bread and to prayer”) and the same wording in verse 46 (“They broke bread in their homes and ate together with glad and sincere hearts”) to be about common ordinary meals. The logic generally used in this analysis is that verse 42 is about teaching and prayer, therefore, it’s in a worship context, so it must be the Lord’s Supper. Verse 46, however, describes an every day action taking place in homes, so it must be a common meal. We ignore the line about praising God in that same context.

I would say the burden of proof is on those who claim verse 46 is not the Lord’s Supper.

The easiest criticism of our traditional view is to ask whether Luke really would use the same words to describe two completely different activities in a span of five verses. Most certainly not! But, I think that misses the point. In the first place, to even ask if one is the Lord’s Supper and one is a common meal is to assume that it’s not both. And we know it is! In the New Testament and for the first 200+ years of Christianity, the Lord’s Supper IS a common meal. In Scripture, you can have a meal without the Lord’s Supper, but you cannot have the Lord’s Supper without a meal.

But verse 46 says “every day.” It can’t be the Lord’s Supper because we only do that on Sundays.

Let’s not read our traditions and our practices today back into the Holy Scriptures. Remember that during New Testament times all Christian worship assemblies were held in homes. Remember that the Lord’s Supper was a full meal, never just bread and wine. Remember that these full fellowship meals were celebrated joyfully in the name of Jesus, with thanksgiving to God, as an expression of their blessings and unity in Christ. I would argue that for these early Christians, there were no common meals. Every meal they ate together is the Lord’s Supper. Remember, too, that sharing their food with the needy is an important part of the communion or Lord’s Supper instructions we find in late 1st century and early 2nd century writings in the Didache and by Justin Martyr. If part of the Lord’s Supper is about feeding the poor, you would have to do that more than once a week, right? Also, remember that the day of the week and the time of day for Christian worship assemblies is not uniform in the early Church until the late 2nd or early 3rd centuries. There are plenty of writings, Ignatius’ letters among them, that call for more frequent celebrations of the Eucharist. A Sunday-only Lord’s Supper and Sunday-only worship assemblies is only established later, generally linked to the separation of the Lord’s Supper from the common meal during the 4th century.

Gospels, this passage presents the communion dinner in a resurrection/life context, not a crucifixion/death context. However, like the previously discussed verses in Acts 2, we have traditionally interpreted the same phrase used in the same setting, separated by only four verses in this passage, as two different activities. We’ve said verse 7 is the Lord’s Supper (“On the first day of the week we came together to break bread”) because it’s Sunday and it’s the primary reason the Church gathers. But we claim verse 11 to be merely a common meal or even a snack (“Then he went upstairs again and broke bread and ate”) because it’s after midnight — Monday! — and there don’t seem to be any formalities mentioned.

Again, for many of the same reasons outlined above, the burden of proof is on the one claiming that verse 11 is not the Lord’s Supper.

In this story, the breaking of bread seems intentional. This is the explicitly stated reason for this Christian gathering. Paul’s sermon seems to be an add-on or a special circumstance. There is, of course, theological significance to “first day of the week.” That’s the day of Resurrection and the birthday of the Church. The Eutychus episode serves as the table talk. It’s the sermon illustration. Jesus and Eutychus were dead, now they are alive. Christ eats with us at the table, just like Eutychus is doing right now. This community of faith ate their meal with this visible example of their hope in the resurrection. I wonder what the mood was like at that Lord’s Supper? What a powerful reminder that it’s around our Lord’s table where his followers celebrate new life, where we rejoice in our liberation, where we experience his perfect peace.

Acts 27:33-36 – This one’s a little tricky. Most scholars are divided here on whether Paul breaking bread during the storm at sea is the Lord’s Supper. I believe it is. But only because my definition of Lord’s Supper is communing with God and one another while sharing a salvation meal in the presence of Christ. Luke uses the same words for breaking (klao) and bread (artos) in verse 35. And, remarkably, he uses the same liturgical formula employed by Jesus in the Gospel accounts of the Last Supper, the post-resurrection meals, and the feeding of the multitudes: “He took some bread and gave thanks to God in front of them all. Then he broke it and began to eat.”

But these aren’t Christians; they are pagan sailors. This isn’t a worship service. They’re in a boat. It might not be a Sunday. These are not church people. How can it be the Lord’s Supper?

Again, the burden of proof is on those who deny this as a Lord’s Supper account. Let’s not read our current practices back in to Scripture. Notice the salvation context of the story and the meal. Notice how this story acts as a rehearsal of the Gospel:

At the very least, allow me to assert that this meal at sea points to the Lord’s Supper as a reminder that the presence of the risen and reigning Christ can be experienced everywhere, anywhere. And that any meal eaten with thanksgiving to God and in recognition of our salvation through Christ is, in a broad sense, a Lord’s Meal.

While reflecting on the Acts 2 passage, you might consider how the community/communion aspect of the Lord’s Supper function in our understanding and practices of the sacred meal. Are those meanings properly emphasized in the Sunday morning practices at your church? What about the resurrection aspect of the meal emphasized in Acts 20? Is this facet of the Lord’s Supper properly expressed in your Sunday morning assemblies?