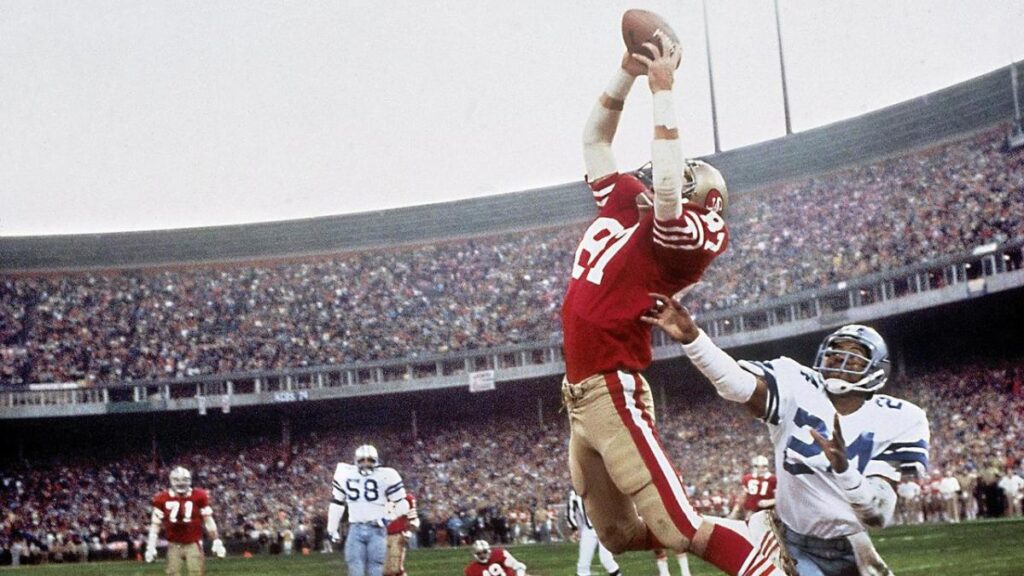 How many times have you seen it this week? “The Catch.” They started showing it the minute the Forty Niners beat the Rams last Sunday to secure their trip to JerryWorld to play the Cowboys this weekend in the opening round of the playoffs. By “they” I mean every local, regional, and national sportscaster and commentator and highlights show. And they have shown it constantly.

Third down from the Dallas six-yard-line. Joe Montana rolling right. Too Tall Jones  and D.D. Lewis in pursuit, chasing Montana back and to the sideline. Montana looking downfield and raring back. Jones and Lewis stretching out their arms and jumping to deflect the desperation heave. Everson Walls’ bad angle as Dwight Clark cuts across the back of the end zone. Montana’s pass is too high to catch. Clark miraculously grabs it from outer space as Walls and Michael Downs helplessly watch. Clark comes down in bounds and scores the touchdown that defeats Dallas and sends the Forty Niners to Super Bowl XVI.

“The Catch” famously changed the fortunes of both football franchises. The Forty Niners went on to win four Super Bowls in the ’80s while the Cowboys went on to win their division only once in the next seven years, leading to the sale of the team and the firing of Tom Landry. Entire documentaries have been produced around “The Catch.” It’s been analyzed to death. Was Montana attempting to throw it away and live for fourth down? If Too Tall hadn’t left his feet, would he have sacked Montana? If Benny Barnes were playing Clark instead of Walls, would the veteran have taken a better angle?

It didn’t help that Monday was the 40th anniversary of “The Catch,” another excuse to show it in slow motion HD from all three angles for the zillionth time.

My 15-year-old self was as depressed and dejected over “The Catch” that afternoon as Michael Downs looks in the original footage. And every single time I’ve seen it since then, during these 40 years, my stomach sinks into my socks.

But I’d rather watch “The Catch” again than what happened during the last 51-seconds of the game.

See, most people have gone through the past 40 years assuming “The Catch” was the last play of the game. The way we’ve minimized that game down to that one play has left us  with a collective amnesia. That Sports Illustrated cover has become the whole story.

“The Catch” gave San Francisco a one-point lead, but there were still 51-seconds left and Dallas had two timeouts and a really good kicker in Rafael Septien. Do you remember what happened?

Can you handle it? What did you have for lunch?

Timmy Newsome returned the bouncing kickoff to the 25-yard line and, on first down, Danny White zinged an absolutely beautiful precision pass across the middle to Drew Pearson for 31-yards to the San Francisco 44-yard line. Butch Johnson called timeout. And Candlestick Stadium was stunned. Dallas was back in control. They needed only ten more yards to kick the game-winning field goal and they had 38-seconds and a timeout to spare. Septien was warming up on the sideline. Landry appeared confident. So did Randy White and Bob Breunig on the Dallas sideline.

First and ten at the San Francisco 44 yard line. White drops back to pass, standing in the middle of the 49ers logo at the 50. Dorsett runs a safety route to the left flat while Ron Springs stays in to block. Six Cowboys are blocking four San Francisco pass rushers. And they sack White. The pocket collapses, White goes down. This is bad. The ball pops out. This is a disaster. It’s a fumble. Jim Stuckey recovers for San Francisco and the game is over.

Go Youtube that and find out how nauseated you can really get.

It’s sickening. It’s another in a long line of “almosts” for the Cowboys and their fans. If the Cowboys had won the Ice Bowl, the Super Bowl trophy would be named after Landry, not Lombardi. If Jim O’Brien hadn’t made that field goal with 13-seconds left in Super Bowl V. If Jackie Smith hadn’t dropped that third down pass in Super Bowl XIII. If Lynn Swann had been called for offensive pass interference. If it hadn’t been so cold in Philadelphia in 1980. If Tony Romo hadn’t fumbled the snap against Seattle. If the referees had ruled Dez Bryant’s catch a completion. As Dandy Don used to say, “If ‘ifs’ and ‘buts’ was candy and nuts…” That’s the story of the Cowboys.

But we forget about Danny White fumbling in San Francisco at the 49ers 44 yard line on first down with 38-seconds to play. The focus has always been on “The Catch.” Between now and this Sunday, when the Cowboys and Niners renew their great playoff rivalry, you’re going to see it another 73 times.

And it’s just as well. The alternative is so much worse.