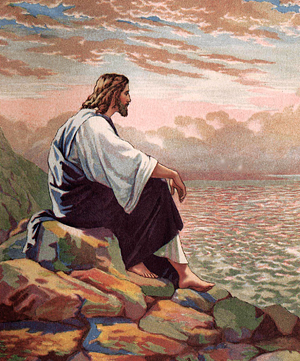 At the end of Matthew 11, there’s a short little prayer of praise and thanksgiving from Jesus. Two short little sentences. It seems very spontaneous, like it just comes out of nowhere. It’s almost buried in the middle of a whole page of red letters, so it’s easy to miss. When people do studies on the prayers of Jesus, this one never gets mentioned.

But this prayer really doesn’t come out of nowhere. This is a specific setting, a particular time and place for Jesus. There is a reason this prayer is where it is. And it has a lot to teach us.

At the beginning of Matthew 11, John the Baptist has been thrown into prison and he questions the Messiahship of Jesus. Through his own followers, he asks Jesus, “Are you the one who was to come, or should we expect someone else?” For John, things were worse for him now than before Jesus arrived. John is suffering and King Herod has even more power and control. You’re not getting the job done, Jesus. I’m in trouble for preaching truth and the political powers are getting away with murder. Jesus is misunderstood by John. Everything Jesus is working toward, the whole reason he came, who he is – John doesn’t see it yet.

At the same time, the fishing villages around Galilee where Jesus was raised and where he was now living and teaching, were ignoring him. The synagogue in Capernaum was Jesus’ home church. The text tells us that Jesus did more miracles in Korazin, Bethsaida, and Capernaum than in any other towns. But they were indifferent in their response. Jesus did not matter to them. So our Lord blisters the citizens of those villages, comparing them to Tyre, Sidon, and Sodom.

Verse 25 says, “At that time…” In the middle of all this. While Jesus was dealing with this. When Jesus was going through this. In this setting. In this time and place in his life. Jesus prayed praise and thanksgiving to God.

“I praise you, Father, Lord of heaven and earth, because you have hidden these things from the wise and learned, and revealed them to little children. Yes, Father, for this was your good pleasure.” ~Matthew 11:25-26

Jesus says the wise and the learned don’t get it. He’s using irony in his prayer. I praise you, Father, because you have hidden these things from the smarty-pants and the know-it-alls. What God is doing through Jesus has nothing to do with worldly wisdom or worldly values or worldly knowledge – it comes from above. So those who are entrenched in the pursuits and goals of the world, those who identify with the ways and means of the world – they miss it. Jesus knows that. And he gives thanks to God. Jesus knows that misunderstandings and indifference are not reliable indicators of the presence of the Kingdom of God. And he praises the Lord.

The powerful and unstoppable energies of the Kingdom of God are always moving. Always growing. Always surging. Just beneath the surface. All around us. Huge rivers of prayer and faith and hope and praise and forgiveness and salvation and holiness flow right by us every day. In every single nook and cranny, hidden in the shadows, overlooked in the crowds, drowned out by the noise, it’s there. It’s always there. We just don’t always see it. Or experience it.

So, when Lazarus is in the tomb. When Paul is on a sinking ship. When Peter is confronted near the enemy’s fire. When the Samaritan woman is by herself at the well. When the broken man is living among the dead outside his community. When nobody will help the crippled guy into the healing waters. When Silas is arrested. When the apostle is sent to exile on a prison island. When the crowds are shouting “Crucify him.” When Jesus is hanging on a government cross. Our God gives life to the dead and calls things that are not as though they were (Romans 4:17).

When the doctor gives his diagnosis. When the marriage counselor says, “I’m sorry, but I’ve done all I know how to do.” When the pink slip shows up in your box. When your children have gone off the rails. When your best friends leave your church. When you have been completely misunderstood. When you’ve been hurt by that same person, again. I praise you, Father, Lord of heaven and earth, because you have hidden these things from the wise and learned, and revealed them to little children. Yes, Father, for this was your good pleasure.