A Quarter Century of the Whitster 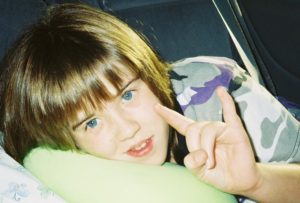 Whit-Pit’s beautiful eyes are just as blue today as they were when she FINALLY decided to be born late, late, late that Wednesday night in Austin. Her enthusiasm for all things related to any sports team in Texas is just as rabid as it was when she was three-years-old and would cuddle up with me on the couch in our first house in Marble Falls to share a bowl of popcorn and cheer on the Rangers and Mavs and Longhorns and Stars. Her love for others is just as infectious, her spirit just as sweet, her joy just as contagious as it’s been her entire life.

When we shared a birthday breakfast at Calico County this morning, we talked about the Rangers’ starting rotation and Dennis Smith, Jr being in the All-Star dunking contest. We re-capped the Stars’ win last night over St. Louis and calculated the ‘Horns’ chances this afternoon against Zero-U in Norman. But we also discussed things you talk about with 25-year-olds: her car, her job, what we’re doing with our/her health insurance, why the breakfast “special” at Calico County comes with a drink but the breakfast “traditional” doesn’t.

So many things about Whitney are exactly as they’ve always been. Her personality, her voice, her speech patterns, her physical features, her unbridled exuberance for others — all of that is exactly the same. Watching a video from when Whitney was eight-years-old is like watching her today. Talking to her on the phone, listening to her voice, it’s easy to imagine you’re talking to a seven-year-old Whitney. She’s different, but it’s subtle. She’s older and more responsible, but it’s nuanced. Her loves are deeper, her concern for others is expressed more outwardly, her tastes are more broad.

And as long as she lives, nobody will ever have a hard time loving Whitney.

Happy Birthday, Whitney. You are a tremendous blessing from our Lord to every person who’s graced by God to know you.