Do You See Anything? 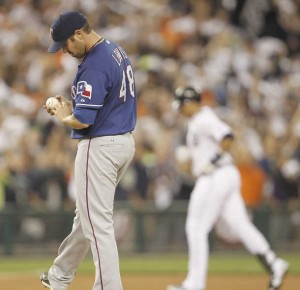 Yesterday’s Skip-shot in this space has started something. I received a text from Byrnes very early this morning that said:

“Colby Serves Up the Cheese in Rangers Loss.”

If you’d like to add a corny headline about last night’s game before this afternoon’s begins, jump in.

We’re conditioned by our world — actually it’s in our nature and then reinforced by the world — to see the things we want to see and hear the things we want to hear. Anybody with a spouse or any children know this first hand. I’ll tell the girls “maybe” and they run to Carrie-Anne and say, “Dad said we could!” As a preacher, sometimes this works in my favor. Somebody will tell me how wonderful it was when I said such-and-such and I have no idea what she’s talking about. What this lady heard is nowhere near what I was preaching. But it meant something to her. And I still take credit for it. Of course, it certainly can work the other way, too.

In the Gospel of Mark, Jesus keeps asking people if they’re seeing correctly. Jesus asks the blind guy in Mark 8, “Do you see anything?” Same chapter, in the boat before Jesus and his apostles reach Bethsaida, he asks them, “Do you still not see?”

The blind guy in Mark 8 whose vision is blurry, whose eyesight is not perfectly clear, who sees something but not everything, represents everybody in the Gospel. And most everybody we encounter today. We see Jesus. But we don’t see all of him. We only see what we want. We embrace the Jesus who heals and forgives and feeds and loves and accepts and saves. We want to follow Jesus and live like that Jesus. But a Jesus who suffers and dies? Peter refused to see it. Most everybody did. Sometimes we don’t see it. And our picture of the Messiah is woefully incomplete. The Savior we teach is less than whole. The Gospel we preach is only partial truth.

We don’t see Jesus completely until we see his suffering and death. To see Jesus die is to understand who he really is and what he really came to do.

There are only two people in the entire Gospel of Mark who are said to “see.” One is Bartimaeus, the only other blind guy in the whole book, in Mark 10. This is Jesus’ final miracle, his last healing, as he enters Jerusalem to die. Bartimaeus calls out to Jesus, “Son of David!” That’s the Messianic title. The blind guy is the only one who sees. Jesus asks him, “What do you want me to do for you?” And Bartimaeus answers, “I want to see.” And the text tells us that “immediately he received his sight and followed Jesus.” To the cross. To his death.

The other one is the Roman Centurion. At the cross. At Jesus’ death. The crowds were shouting, “Come down from the cross that we may see and believe!” When the soldier “saw how he died,” he confessed Jesus as the Son of God.

If you tell Jesus “I want to see,” what you’ll see is a commitment to trials and ridicule and persecution and suffering. You’ll see a road, a way, that leads to your death. What you’re promised is the same exaltation and glory that he now has as the resurrected Lord reigning at the right hand of the Father in heaven.